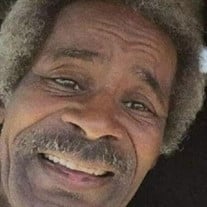 Celebrating His Spirit…. William Gentry was born on March 5, 1954 in Cincinnati, Ohio to the union of Ida Snow and James Douglas Gentry. William was a father, brother, uncle and a friend to those he touched throughout his journey. He left this world to rest in peace on February 14, 2022. William’s life was cut short due to a series of avertible events which led to his departure. He left his mark on the world through his music. His life was a living legacy and a living example of the famous song lyrics: “I faced it all, I stood tall; And I did it my way” ..Frank Sinatra. His creativity and love for music flourished at Withrow High School. It was at Withrow where the world would get a taste of his art and talent and where his music would first showcase as “The Sounds of Withrow.” He later met and married the love of his life, Delphine Horton, on June 24, 1978. The couple held a private wedding in a small home on Russell Street in Detroit Michigan. Their beautiful union was blessed with two daughters, Danna and Deanna. William fine tuned his multiple talents into a rewarding career in music. He was a master trumpeter, flugelhornist an vocalist. He joined the soul group 24 CARAT BLACK with Enterprise/ Stax Records. This group was formerly known asGhetto Misfortunes Wealth, and as The Ditalians. They successfully produced an album that was a tribute to living life in the inner city. William then joined Shotgun, a Detroit funk group that originated in Ann Arbor Michigan. He later signed with ABC Records, which allowed him to travel the world and perform with artist such as The OJay’s, Bootsy Collins, Billy Paul, Chaka Khan, and The Ohio Players, just to name a few. For over 40 years he dedicated his life to music. He also performed as a street musician at various local venues such as The Cincinnati Zoo & Botanical Garden and Fountain Square. Music is what kept him going and full of life. His music will live on forever in our hearts as an everlasting memory. William was preceded in death by both his parents, Ida and James Gentry. William leaves to cherish his loving memory his children, Danna Gentra and Deanna (Roy) Hudson; his siblings, James Gentry, John Gentry, Sharman Gentry-Allfree, William Gentry, Jerome Gentry, Mark (Carrie) Gentry, Brett Gentry, Hugh (Thelma) Gentry; his grandchildren, Curstin Foster, Kayla Gentry, Daryl Holman, Kyra Hudson, Kennedy Hudson. He will also be dearly missed by a host of nieces, nephews and a community of friends he touched throughout his journey.

Celebrating His Spirit&#8230;. William Gentry was born on March 5, 1954 in Cincinnati, Ohio to the union of Ida Snow and James Douglas Gentry. William was a father, brother, uncle and a friend to those he touched throughout his journey.... View Obituary & Service Information

The family of William Gentry created this Life Tributes page to make it easy to share your memories.

Celebrating His Spirit….
William Gentry was born on March 5,...

Send flowers to the Gentry family.