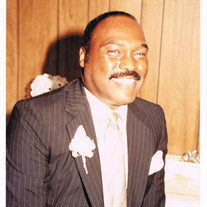 Celebrating His Spirit Thomas Walton, Jr. passed away on January 28, 2021 at the age of 78. Thomas accepted Jesus Christ as his Lord and Savior on March 20, 2017. His battle with serious medical issues in recent years showed his courage in facing life’s challenges with positivity and a smile. Thomas was born on November 8, 1942 in Chattanooga, TN. into a family with an older brother, Robert Daniels and a younger brother, Leonard Walton. He graduated from Cincinnati’s Robert A. Taft High School in 1960. He started his career as a welder at Norwood’s General Motors Plant. After 38 years of dedicated service, he retired from GM’s Dayton plant. He was known for his love of art, fashion, and cars. He was often spotted in an immaculately fitted, custom-made suit with carefully curated accessories and an unmistakable fragrance. He was the ultimate storyteller who entertained family and friends for hours, delighting everyone with his big, booming laugh that could be heard from anywhere. Thomas had an unbreakable spirit. No matter what challenges he faced in life, he remained joyful and forward-looking. Thomas, who was easy-going, warm, and welcoming to all, was an avid reader and jazz enthusiast. His favorite author was James Baldwin. When it came to music his favorites included: Billie Holiday, Marvin Gaye, Al Green, Stevie Wonder and Michael Jackson. He also loved all sports and any James Bond movie. He never met a stranger. He loved his family most of all. Thomas was preceded in death by his father, Thomas, Sr. and his mother, Ozie; his brothers, Robert Daniels and Leonard Walton; and his former wives, Cheryl D. Walton, Donna Jean Walton and Donna (Lee) Walton. His loving spirit will forever be cherished by his six children Jarnell (Carlton) Threatts, Germaine (Robert) Hillard, Ian Walton, Khemise Walton, Kellana Walton, and Aryana (Eric) Thompson-Weinhold; grandchildren, Sasha M. Threatts, Casandra N. Threatts, Carlton A. Threatts, Jr., Chelsea A. Threatts, Miranda Walton, Genesis Hillard, Nadia Hillard, Ian Jordan, Asia Upshaw, Malichi Minyard, Devyn Walton, Kamaria Walton, Ojani Thompson, and Hasaan Thompson; his three great- grandchildren, Ava Riston, Ace Collins and Troy Jackson Jr.; his two nephews, James Veal (Chuck) and Gregory (Debbie) Daniels; and his cousin, Johnny Childress. He will also be greatly missed by a host of other cherished relatives and friends that he touched throughout his journey.

Celebrating His Spirit Thomas Walton, Jr. passed away on January 28, 2021 at the age of 78. Thomas accepted Jesus Christ as his Lord and Savior on March 20, 2017. His battle with serious medical issues in recent years showed his courage in... View Obituary & Service Information

The family of Thomas Walton Jr. created this Life Tributes page to make it easy to share your memories.

Send flowers to the Walton family.