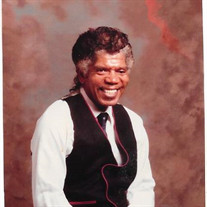 Terry Robert Nash made his grand arrival into this world on June 27, 1930 in Butler, Pennsylvania to the proud parents, John Alexander and Aleathea Nash. Terry was a rambunctious young boy and could not wait to explore the world. He had big dreams in his pocket, mixed with a lot of determination. After he completed the eighth grade at Bloom Junior High School, he set out to fulfill his destiny. Terry enjoyed a variety of careers during his lifetime. He was a construction worker, coal miner, janitor and a mechanic at General Motors. His true passion was working on cars..preferably his two favorite models...Lincoln and Cadillac. Terry’s search for his life companion lead him to his first wife, Willa Pearle Nash. The couple married in the 1940s and their union was blessed with four wonderful children, Terry Jr., Serena, Tootie and Candy. Willa Pearl preceded him in death. When Terry lost Willa Pearle, he found comfort and strength through his best friend, Lonnie Nash. Terry and Lionne had four amazing children together, Demetrious, Darlene, Sugar and “Little Man” Dartalian Nash. Terry still felt like he was missing something special in his life and that something became a “someone” in 1981 when he met Kim Dean. Terry and Kim had one child together, Terri “Cookie” Nash. Even though his marriage did not last long with Kim, Terry continued to love her until she passed on January 17, 2014. He continued to have a lovely friendship with Lonnie and took care of her until she said her final “goodbye” on Nov. 1, 2013. He also had a brother, George Simpson, who preceded him in death on August 26, 2015. Terry decided it was time to join all of his loved ones on Oct. 14, 2015. Terry leaves to cherish his memory his children, Terry Jr., Serena, Tootie, Candy, Demetrious, Darlene, Sugar, Dartalian and Terri “Cookie” Nash; his siblings, Ernestine Watson and Beatrice Seals; six grandchildren, Tyisha Nash, Da’Shauna Nash, Joshua Nash, Dareese Nash, Dartalian Nash Jr. and Timothy Kitt Nash; one great-grandchild, Juakell Nash. Terry also leaves behind a host of grandchildren, relatives and friends who will never forget his over-sized spirit.

Terry Robert Nash made his grand arrival into this world on June 27, 1930 in Butler, Pennsylvania to the proud parents, John Alexander and Aleathea Nash. Terry was a rambunctious young boy and could not wait to explore the world. He had big... View Obituary & Service Information

The family of Mr. Terry R Nash created this Life Tributes page to make it easy to share your memories.

Terry Robert Nash made his grand arrival into this world on June...

Send flowers to the Nash family.