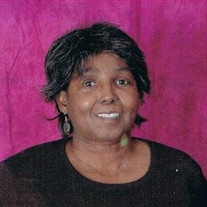 Celebrating the Life and Spirit of Sharon Sharon Diana Murphy was born to the union of Gertrude Jackson Murphy Douglass and William Murphy on June 12, 1963 in Oakman, Alabama. Sharon, affectionately called Diane by family and friends, was blessed with a multitude of talents and endless ambition. She departed this life on Dec. 30, 2016 into the arms of The Lord. Diane, the second child of Gertrude’s, lived with her grandmother Dena Jackson, as a youngster in Alabama. Upon the passing of Dena, Diane moved to Cincinnati to live with her mother Gertrude, step-father, Zack Douglass and Baby Sister Sally. Diane confessed Christ at an early age and served faithfully in her church when she was active and healthy. Diane learned the importance and power of prayer at a young age from her grandmother, Dena, who was a powerful prayer warrior. She attended St. Mary Catholic Elementary School on Carr Street and Hughes High School. During high school, Diane returned to Alabama to live with her father. She graduated from Bibb High School in Centerville, AL and returned to Cincinnati to attend The University of Cincinnati and Cincinnati State College. Diane received certification in business administration, media and broadcasting. She was blessed with natural talent, which inspired her multi-faceted career interest and achievements. Diane’s focus and talent was in media and broadcasting. She enjoyed participating in theatre and was an excellent photographer. She rarely went anywhere without a camera in her hand. Diane, a dedicated student of the arts, was working on a documentary of Avondale prior to her death. She was also an avid reader, movie buff and loved music. Diane also dearly loved spending time with family and friends. She will be dearly missed by all. Diane leaves to cherish her memory her siblings Sally Douglass, Valerie (James) Turner of Utah, Valencia (Anthony Harrison) Douglass, Robert (Doris) Douglass, Anthony (April) Douglass, Michael Douglass and Rodney (Tamika) Douglass and Maude Moore of Alabama; two aunts, Lillie Mae Harris and Henry Mae Bell of Fayetteville, N.C.; a host of loving nieces, nephews and an awesome number of cousins. There will forever be special love for special friends, Ann (Douglass) Evans, Brenda Mosely and Angie Henson.

Celebrating the Life and Spirit of Sharon Sharon Diana Murphy was born to the union of Gertrude Jackson Murphy Douglass and William Murphy on June 12, 1963 in Oakman, Alabama. Sharon, affectionately called Diane by family and friends, was blessed... View Obituary & Service Information

The family of Sharon Diana Murphy created this Life Tributes page to make it easy to share your memories.

Celebrating the Life and Spirit of Sharon
Sharon Diana Murphy...

Send flowers to the Murphy family.