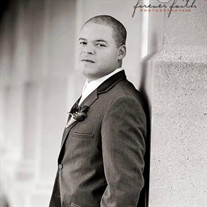 live streaming for service is at: leechapel facebook page Ryan Jermaine Thompson was born on September 15, 1981 in Cincinnati, OH to the union of Kenneth and Carolyn (Washington) Thompson. On the morning of February 5, 2021, he received his wings, departing this life with loved ones by his side. He grew up in Cincinnati and attended Summit Country Day. He continued his education at Walnut Hills High School, (WHHS) where he played varsity football and participated in numerous groups, including National Society of Black Engineers (NSBE) . Ryan developed close friendships throughout his school years and was a proud WHHS alumnus. Following his 2000 WHHS graduation, Ryan attended The University of Toledo, where he earned a Bachelor of Science degree in Mechanical Engineering Technology in 2005. Ryan married Tiara Dunbar on October 27, 2010. Tiara, who was also a WHHS alumna, reconnected with Ryan at their mutual friends’ wedding in 2009. Prior to her passing in 2015, Ryan and Tiara worked together to help advocate for cancer patients and to encourage organ donation. He was employed by the Procter & Gamble company for more than 15 years as a product supply manager. His position, based in Lima, OH, required him to travel throughout the United States as well as overseas. (Ryan had planned to return home to Cincinnati to live prior to his passing.) He also ran Alex’s VIP Lounge, continuing the legacy of his grandparents, Jeroniecal “Alex” & Columbia Tyler, who ran the Avondale landmark for years. In 2014, Ryan created The Urban Valley Foundation, with good friend Jamel Johnson, in an effort to help provide educational support and to make a positive mark on the Avondale community. The Foundation has raised thousands of dollars for college scholarships, uniform vouchers, school supplies and much more. Always the life of the party, Ryan loved engaging with family and friends on holidays and for BBQs. He challenged many of them in cooking contests - one of his many hobbies. He also enjoyed traveling, fishing, playing poker, singing karaoke, running and shooting pool. Ryan also loved attending all types of sporting events, especially going to Cincinnati Reds games with his grandmother Lummie, who greatly influenced his love of the team. His determination to live life to the fullest rubbed off on those around him. Ryan left a lasting impression on everyone he touched throughout his life’s journey and will be deeply missed. He was preceded in death by his adoring wife Tiara Dunbar Thompson and grandparents Jeroniecal “Alex” and Columbia Tyler and Rollon and Elva Thompson. Ryan will be forever loved by those left to cherish a multitude of great memories: his parents, Kenneth & Carolyn Thompson; sister, RaGann Thompson Gipson; sister-in-laws, Amanda Dunbar and Jalesisa Morgan; brother-in-law, Joshua Calhoun; nephews and nieces, Cevaughn Gipson, Christian Gipson, Emery Moore, Brighton Moore, Carson Morgan and Miyla Johnson; uncles, Rollon M. (Olga) Thompson (Phoenix, AZ) and Alexander Washington (Hinesville, GA); aunt, Dr. Cyd Williams (Atlanta, GA); cousins, Marq Thompson (Dallas, TX), Kai Thompson (Columbus, OH), Jason Washington, Kasey Greer, Colin, Austin & Spencer Williams (Atlanta,GA). He’ll also be eternally missed by a host of other family and friends.

live streaming for service is at: leechapel facebook page Ryan Jermaine Thompson was born on September 15, 1981 in Cincinnati, OH to the union of Kenneth and Carolyn (Washington) Thompson. On the morning of February 5, 2021, he received his... View Obituary & Service Information

live streaming for service is at: leechapel facebook page