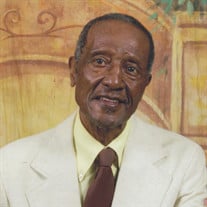 Celebrating His Spirit Oscar Lee Timmons was born on September 19, 1925 in Dawson, Georgia (Terrell County) to Beatrice Gardner and Premus Timmons. He departed this earthly life on Thursday, April 30, 2015 at Hyde Park Health Center at 1:30 p.m. Oscar received Christ at an early age in Dawson, Georgia joining the ATOC A.M.E. Church. After moving to Cincinnati, Ohio in 1944, he joined Shiloh Baptist Church on Lincoln Park Drive (now known as Ezzard Charles Drive) under the leadership of Rev. James Smith. He later moved his membership to Peace Baptist Church at 652 Rockdale Avenue under the leadership Rev. D. L. Motley. He attended church until his health began to fail. Oscar received his primary education in Dawson, Georgia. He served in the army during World War II as a proficient truck driver, which led to his owning a trucking business after returning from the War. Prior to owning his trucking business, he was co-owner of Beatrice & Son Dry Cleaners. He retired from Zumbiel Box Company. Oscar was united in Holy Matrimony to Evelyn McKenzie on March 18, 1950. They enjoyed 28 years together. To this union, four children were born. Oscar became an avid golfer after caddying as a child. He enjoyed traveling and camping with his family and close friends, entertaining at his cabin in Indiana where everyone gathered around his bonfires, had a love for jazz, and owned an extensive jazz collection. Oscar was jokingly referred to as “Mr. Sawyer” by close friends and family because he was considered a “Mr. Know-It-All.” He had a wonderful sense of humor. For example, whatever age you were, he would always say he was one year older. He was a very positive man, always seeing the glass half full instead of half empty. He was full of wisdom, and was a very humble and appreciative man. One of his favorite quotes was “money can’t buy it.” He was preceded in death by both parents; his loving wife, Evelyn; his sisters Bertha M. (James), Bobby (James), and Jurie. He leaves to cherish his memory: three sons, Fernell L., Lannis J. (Annie), Malcolm; one daughter, Linda Timmons; all of Cincinnati, Ohio; three grandchildren, Michael Ventus, Felicia Timmons, and A. Majestic Williams III; two sisters, Minnie Carter and Dorothy Rollinson, both of Cincinnati, Ohio; four great grandchildren, and a host of nieces, nephews, other relatives and many dear friends.

The family of Mr Oscar Lee Timmons created this Life Tributes page to make it easy to share your memories.

Celebrating His Spirit
Oscar Lee Timmons was born on September...

Send flowers to the Timmons family.