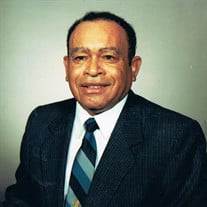 Celebrating His Spirit . . . . John Albert Bates, 78, was born on June 16, 1938 in Selma, Alabama to the union of Albert and Josephine Bates. John departed this life on September 23, 2016.        John, the third of six siblings, attended school in Selma and graduated at 17 from Shiloh High School. In 1956 , he moved to Cincinnati with his suitcase, a bag of sandwiches and a five-dollar bill in his pocket to begin his new life. As a young man John worked as a janitor, furniture mover and for The U.S. Post Office. He spent most of his career as a machinist for Cincinnati Milacron, where he retired in 2000 after 33 years of service. John re-dedicated his life to Christ in 2005 at the New Life Outreach Church in Springdale, Ohio. John enjoyed gardening, cooking, fishing, playing dominos and The Cincinnati Reds. He was an excellent cook and gardener. John grew a full garden in his backyard and welcomed family and friends to his harvest as long as they,“ closed his gate.” John, who was married twice, was blessed with six children and three step-children. He was preceded in death by his parents; his sister, Lovinia Jimmar and brothers, Lloyd Bates and Albert Bates Jr. He leaves to mourn his passing his children Brenda Robinson, Linda Spriggs, LaVerne (Greg) Adams, Rita Toney, Casita McCrary, John Albert Bates Jr.; step-children, Vicki Beavers, Jerry Colbert and Melinda Colbert; sister, Thelma Murray and brother, Roy Bates; 16 grandchildren, 20 great-grandchildren, and a host of family and friends.

The family of John Albert Bates created this Life Tributes page to make it easy to share your memories.

Send flowers to the Bates family.