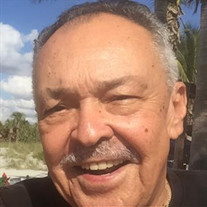 Celebrating His Spirit…. DeWolfe Rossman Turpeau Jr. was born on May 23, 1938 in Cincinnati, OH, to the union of Christine Boone Turpeau and DeWolfe Rossman Turpeau Sr. He departed this life on November 28, 2020, surrounded by the love of his family, into the arms of The Lord. DeWolfe, affectionately called “Booghie” by family and friends, was the oldest of the three children…his brother, Aaron ( “Pal)” and sister, Yvonne. Yvonne preceded him in death in 1972. He graduated from Walnut Hills High School and furthered his education at West Virginia State, where he was a member of the school’s tennis team. His talent on the tennis court helped to propel the team to win the 1959 Championship Tennis Team. His singles and doubles record in 1959 was 24 and 1. He was named captain of the Tennis Team in 1960. And in 1998 he was inducted in into the West Virginia State Sports Hall of Fame. Rossman earned a B.S. Degree in Physical Education and Health from West Virginia State and received his M.A. from Xavier University, Cincinnati, OH. He also served as a Lieutenant in the United States Army. He and Evva Friason Turpeau married in 1992 and resided in Cincinnati until they moved to Cape Cod, Mass. and Punta Gorda, Fla. to enjoy their retirement years. They finally returned to Cincinnati in 2018 to be closer to friends and family. Rossman’s extensive educational experience started in Cincinnati Public Schools, where he served as a physical education and health teacher. He then transitioned into the district’s administration, serving from 1973-1992 as assistant principal at Roll Hill Elementary, principal at Washington Elementary, principal of Silverton Elementary and Losantiville Elementary, after which he retired. He also served as Legislative Chairman of Cincinnati Association of Administrators and Supervisors. He was a member of H.O.M.E (Housing Opportunities Made Equal), member of the board of directors of Daniel Beard Boy Scouts, executive officer of Silverton Cub Scouts, board of directors of Clinton Hills Swim and Tennis Club, and a board member The Juvenile Justice Commission. Rossman was a long-standing member of his family’s church home, Mt. Zion United Methodist Church, where he served as a lay leader. He was a member of Alpha Phi Alpha Fraternity, Inc and Sigma Pi Phi Fraternity (Boule). He was also active in numerous civic and social organizations. Yet his greatest achievement of all was that of a present and loving father to a blended family. Rossman is survived by his wife Evva Friason Turpeau and his four children; Debra Turpeau and Taunya (Jay) Boileau , who blessed his union with Selma Buford: Connie Turpeau and Dr. Rossman (Chiante) Turpeau III , who blessed his union with Barbara Gunn; his brother, Aaron (Brenda) Turpeau of Atlanta, Ga.; nephews, Dr. Aaron Turpeau Jr., Michel Turpeau and Todd Jackson; niece, Dr. Alem Turpeau; step-daughters, Evetta and Evitta (Evva Friason’s children); 13 grand-children, 13 great-grandchildren, two step-grandchildren and two great-grandchildren. He will also be dearly missed by a host of other relatives and friends and countless students and teachers he touched throughout his journey.

The family of DeWolfe (Ross) Turpeau Jr. created this Life Tributes page to make it easy to share your memories.

Send flowers to the Turpeau family.