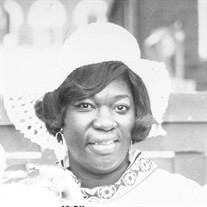 Celebrating the loving spirit of Barbara Ann Byrd Barbara Ann Byrd was born on October 12, 1936 in Cincinnati, Ohio to the union of Wiletta Long and Ralph Jones. She departed this life on January 15, 2019 into the arms of The Lord. She grew up in Lincoln Heights and graduated from Lockland Wayne High School with high honors. After graduating, she started her career as a cook at Holmes Hospital. She furthered her education by returning to school to study physical therapy. Barbara passed The Ohio State Board exam and became a licensed Occupational Therapist. She worked for University Hospital for 30 years until she retired. Barbara Ann was a long-standing, devoted member of Greater St. John AME Church. She dedicated herself to St. John, where she enjoyed cooking for various programs and church events. She not only shared her talents with the church, but she also recruited her son Greg and his friends to help out in the kitchen. Barbara also participated faithfully in St. John’s Lay Council and The Victory Club. She was a strong, determined and gracious woman. Her life was blessed with two children, Gregory and Annette prior to meeting her husband, Lorenzo Pete Byrd. Barbara and Lorenzo were blessed with two sons, Lorenzo Pete Byrd Jr. and Kenneth Byrd. Barbara, affectionately called “Mommie,” was truly loved by her children, family and friends. She loved her family, enjoyed the company of others and had a passion for cooking and working crossword puzzles. Barbara was preceded in death by her husband, Lorenzo Pete Byrd Sr.; her son, Lorenzo Pete Byrd Jr.; her sister, Wilma Carlisle; brother, Everett “Monk” Jones and her beloved sister-in-law, Mamie Lee Jones. Her loving spirit will forever be cherished by her children, Gregory Jones, Annette Jones Day and Kenneth (Doranna) Byrd; her grandchildren, Ciara Jones, Jaela Jones, Joseph L. (Christina) Day III, Jaleesa L. Day, Kenneth Byrd and Davohn Byrd; six great-grandchildren, Mauri , Marlo, Aysiara, Joseph IV, Jadynn and Jordan. She will also be dearly missed by a host of nieces, nephews, the St. John Church family and a community of friends.

Celebrating the loving spirit of Barbara Ann Byrd Barbara Ann Byrd was born on October 12, 1936 in Cincinnati, Ohio to the union of Wiletta Long and Ralph Jones. She departed this life on January 15, 2019 into the arms of The Lord. She grew... View Obituary & Service Information

The family of Barbara Byrd created this Life Tributes page to make it easy to share your memories.

Send flowers to the Byrd family.