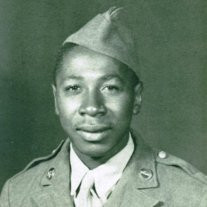 Wilmer Harris Sr., 95, was born to the union of Willa D. and Charlie Harris Sr. on April 9, 1918 in Athens, Alabama. After a long and fulfilling life, he departed this life to be with The Lord on September 29, 2013. Wilmer grew up in Athens, Ala., where he attended school. He left Athens to serve his country during World War II under the direction of the late General George Patton. He served his country for nearly three years before suffering an injury. Wilmer, who obtained the rank of a sergeant, received a purple heart from the late President Roosevelt for his bravery and service to his country. He was honorably discharged on Feb. 8, 1946. He returned to Athens from the service to recuperate from his injury. After a year-long recovery, he moved to Cincinnati to find work. He soon met and married Rita Mae Harris. The couple, married for 63 years, was blessed with eight children. He was a wonderful father, who inspired his children to be self motivated. Wilber was small in stature, but large in spirit. He said what he meant…and meant what he said. As a result, he was well loved by his family and all those he encountered. Wilmer was an entrepreneur for all his life. He owned and operated a gas station in the West End years ago. When he closed the station, he started the Vet’s Cab Co., which he operated for 25 years. He was not only a business man, but a jack of all trades. He could repair just about anything…from the house to a car. He was outgoing, outspoken and got along with everyone. Wilmer worked his cab around the clock and had a private list of clients he drove for on a regular basis. When he wasn’t working, Wilmer loved to fish or work on cars. He was a member of St. Mark Missionary Baptist church for nearly 30 years, where he served as a deacon and trustee for many, many years. His loving memory will be cherished by his wife of 63 years, Rita Mae: eight children, Richard Harris, Pastor Michael E. (Anita) Harris, Calvin (Sonja) Harris, Melvin (Felicia) Harris, Donald (Aretha) Anderson, Larry (Nancy) Anderson, Reggie (Donna) Harris, Regina Harris; A host of Grandchildren, Great-grandchildren, nieces and nephews and other family and friends.

Wilmer Harris Sr., 95, was born to the union of Willa D. and Charlie Harris Sr. on April 9, 1918 in Athens, Alabama. After a long and fulfilling life, he departed this life to be with The Lord on September 29, 2013. Wilmer grew up in Athens,... View Obituary & Service Information

The family of Mr. Wilmer Harris created this Life Tributes page to make it easy to share your memories.

Send flowers to the Harris family.