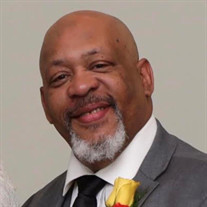 Celebrating His Spirit Tommy Kimmons Jr. was born on Feb. 11, 1962 in Chicago, IL. to the union of Anna Louise (Spottswood) and Tommy Kimmons Sr. He departed this life, with his wife Jonnie by his side, on February 1, 2022 into the arms of The Lord. Tommy, one of 12 children, grew up in Mt. Healthy’s Skyline Acres. He attended Mt. Healthy schools and graduated from Colerain High School. As a youngster, Tommy’s first love was bicycles. He and his brothers learned to build bikes from scratch. They road throughout the city, from Lunken Airport to Skyline Acres. Following his 1980 graduation from Colerain High School, Tommy attended Scarlett Oaks Vocational School for carpentry. Although he never worked as a carpenter, he held a variety of jobs until he settled into his true passion…truck driving. He drove for Empire Trucking Company for 10 years. Upon leaving Empire, he became an independent driver, delivering for Amazon and The United States Post office for more than nine years. He was known for his integrity and his loving, caring heart. His “infectious” personality had the ability to make people laugh. His willingness to help others earned him a reputation as a man of high integrity, blessed with a loving, caring heart. Tommy’s word was his bond. Tommy’s child-hood passion for riding bikes evolved into a love affair with motorcycles as an adult. He stayed on the road, riding his motorcycle and his truck, until he met his future wife, Jonnie in 2018. When the couple married on September 29, 2020, Tommy opted to work for Amazon and the post office in order to be home every night. His past-time hobbies included camping (he owned a two-room tent complete with a porch and media room) and collecting music. Tommy, known as “DJ Teasedale,” always supplied music for family gatherings. He owned a vast supply of record albums, cds and music files. Tommy and Jonnie enjoyed traveling throughout the United States, always searching for new experiences. He also enjoyed traveling with his late Aunt, Irene Bryant, whom he adored. He is the father of one son, Randy Tett. Jonnie, his wife of one year, awarded him,” Best Husband of the Year” award for his loving efforts to manifest an exciting, peaceful and happy life. He was preceded in death by his parents, Anna Louise and Tommy Kimmons Sr. and his beloved Aunt Irene. His loving spirit will forever be cherished by his loving wife, Jonnie; his sisters, Dorothea, Patricia, Monique, Zenith Renee; brothers, Trey, Nicholas, Donnie, Melvin, Steve, Benjamin, Kevin, Aaron; Aunt, Yvonne and Barbara and uncle, Talbert. He was a step-father of three sons, Marco, Tyrone, Warrick and daughter, Angel. He will also be dearly missed by many more, both living and gone.

Celebrating His Spirit Tommy Kimmons Jr. was born on Feb. 11, 1962 in Chicago, IL. to the union of Anna Louise (Spottswood) and Tommy Kimmons Sr. He departed this life, with his wife Jonnie by his side, on February 1, 2022 into the... View Obituary & Service Information

The family of Tommy Kimmons created this Life Tributes page to make it easy to share your memories.

Send flowers to the Kimmons family.