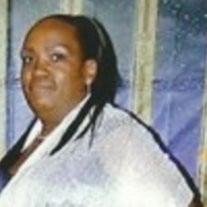 Tara Maria Gordon was born on October 19, 1970 to Leola Gordon and Cleveland Johnson. She departed this life on December 10, 2013. Tara , who was a “little spitfire “ from the start , had a way with capturing your heart. As a little girl ,she would let you know what was on her mind . And she always sought to get her way, doing what she wanted to do no matter what trouble it would cause her. Tara gave her life to the Lord at an early age and joined Revelation Missionary Baptist Church, where she sang in The Rosebud Choir . She later joined the church’s youth and young adult choir. She was a member of the Shape Note Group and New Birth Vocal choir. Tara loved collecting Teddybears ...all 250 plus of them! Tara was always a hard worker and started working at the young age of 16. She graduated from Withrow High School and went on to Job Corp, where she earned a diploma in Carpentry. She worked various jobs but finally found her nitch working at the Great American Ball Park for the Cincinnati Reds. Tara has a big heart and loved helping people any way that she could. She enjoyed travelling, especially to Disney World and whenever the opportunity presented itself for her to go she was there. She loved spending time with her friends and family and even though she did not have children of her own, she made sure that the children in her life knew that she loved each and every on of them.Tara leaves to cherish her memory her father Cleveland Johnson; siblings , Tonia D. Gordon ( Donnie), Valinsk Johnson ( Melissa), Darrian Johnson (Shannon); grandmother, Beatrice Packer; aunts, Catherine Packer, Cynthia Packer and Sylvia Packer; uncle, Alexander Packer, Jr.; nephews, Tre’ Gordon, Taylor Gordon, Tyre Gordon Sprawl, Landen, Cullen, Preston and Benjamin; honorary aunt Terri Bond; Godmother, Ann Madison; best friends, Cosme Napier and Renecia Davis

The family of Ms. Tara Maria Gordon created this Life Tributes page to make it easy to share your memories.

Send flowers to the Gordon family.