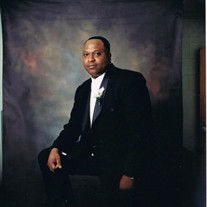 Stephen Michael Jordan May 11, 1969 – March 21, 2022 He cried out to God in pain… God answered his cries and received him home. Stephen Michel Jordan blessed the union of Stephen and Mazie Jordan on Mother’s Day, May 11, 1969...which would be the foreshadowing of his undying and faithful love for his mother. He laid his earthly home at the finish line and crossed over to glory on March 21, 2022. Stephen, the Jordan’s only son, was an incredibly sweet, loving and kind child. He loved playing with racing cars, Atari and riding bikes with his first best friend, Rodney Cook. He would even do ballet moves with his sister, Kim and cousin, Tracey. The three were a “package” deal to every babysitter and family member. Stephen earned the nickname, “Bigman” by his former babysitter, Gloria Applings because he would never cry—not even when her adult sons put him in roasting pan in a cold oven to tease her. When Gloria arrived home from her errands she asked, “ where is my baby?” They pulled him out of the oven and to her disbelief, Stephen wasn’t even crying! He became “Bigman” that day, which evolved over the years as “Biggie, Biggs’’ and finally “Big.” Stephen grew up in his beloved College Hill and attended Cincinnati Public Schools. He played little league baseball for College Hill Knothole and football for P&O/Central Trust Vikings. Stephen, who loved all things sports, was an outstanding pitcher and one heck of a linebacker. His early sports career also introduced him to life-long friends, Vincent Clark, Todd Coleman and many others. Stephen graduated from Cincinnati Academy of Physical Education in 1987 as an Ohio State Champion title holder and received a full scholarship to Ball State University, Muncie, Indiana. Stephen married his high-school sweetheart, Tracy Brown. Their union was blessed with a beautiful baby girl, Rae’l Cheyanne Jordan. He always called his daughter his, “best friend and buddy. “He considered Rae’l” the only woman who could never leave him.” His love for Rae’l was unparalleled. He was a hard-working man who dedicated himself to every job he held. Stephen worked for The Ford Motor Co. for 15 years, followed by many more fortune 500 companies. He worked as much overtime as he could, loved to live good and loved to eat! He was an amazing cook who truly enjoyed his own cuisine. He was also a very generous person who gave his all to those he loved throughout his life. Stephen was a proud Mason and member of Elisha Lodge #106. His father, Stephen Jordan was Past Master of lodge #106 in 1975. He preceded his son in death in 1982. Stephen married Michele Macon, his friend and true companion, in 2015. Bigg loved for Michele to cook for him , which he enjoyed right down to the left overs. Michele was the only one who could make him do what the doctor’s told him. Her love for Stephen endured to the very end. His life will forever be cherished by his loving wife, Michele Jordan; daughter, Rae’l Cheyanne Jordan; his mother, Mazie Bell Jordan; sister, Kimberly Sullivan; aunt, Helen Wilson; uncles, Mzell Williams and Robert Jordan; niece and nephew, Shayla Johnson and Dante Johnson, II; great niece, Solai Gray; four nephews, Ely Gray, Myles, Julian and Kyrie Johnson; 14 bonus grandchildren; bonus daughters, Tia Dumas, Michele Dumas, Jasmine Macon, Tyeisha Walker; bonus sons, Kyle Johnson, Chris Johnson along with a host of cousins and dear friends.

The family of Stephen M. Jordan created this Life Tributes page to make it easy to share your memories.

Send flowers to the Jordan family.