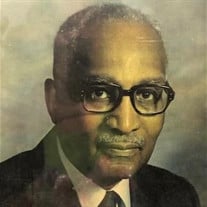 Celebrating Rollon Thompson's Journey Rollon was born October 18, 1921 in Cheraw, South Carolina to Manning Thompson and Roxanne (Bittle) Thompson. Rollon’s life journey ended on January 23, 2020...his sunset arriving 98years, two months and five days after he entered this world. God graced him with longevity, allowing him to serve his country throughout most of his life, witness the growth of African -Americans and become a guiding light of accomplishment to his children and grandchildren. As a child, Rollon watched as the horse-drawn carriage arrived early each morning to pick up his parents and take them to the fields to pick cotton from sunup to sundown. In 1926 his father migrated alone to Cincinnati in search of a better life for his family. He secured employment at The American Oak Leather Company. Once employed, Manning moved his wife and children to Cincinnati.   Rollon attended Cincinnati Public Schools and completed his high school education at Tailoring High School, where he also played varsity basketball. In 1940, a year after his graduation, he joined The Ohio Army National Guard and began a 34-year distinguished military career, which included active duty service in The National Guard, World War II, The Korean War and The Army Reserves. When he was first called to active duty in The National Guard, he was stationed with his unit at Ft. Dix, New Jersey. There, he qualified for Infantry Officers Candidate School. On September 1, 1942 he completed officer training, earning his commission as Second Lieutenant Rollon Thompson. During World War II, LT Thompson served in the Philippines. He returned to Cincinnati in 1943 and was assigned again to the Ohio Army National Guard. That same year he met and married Elva Foye. The couple were soon blessed with two sons, Rollon Michael. and Kenneth. In 1949 Rollon started his career with the United States Postal Service, while he continued training in the National Guard and was promoted to Captain. During the buildup to theAt the onset of the Korean War, he was re-activated and served in Japan. He began a two-year tour of Korea in 1953. Rollon had an amazing ability to balance his military service with obtaining his education. In spite of raising a family and military duties, Rollon attended New York University ,Washington Lee University and Chase Law School to further his education. Throughout his life, Rollon was involved with several hobbies and extra-curricular activities, including traveling the globe with Army companions, golfing, playing bridge, canasta and pinochle. He also loved watching old cowboy movies and old television series. Rollon was a judge and referee for amateur boxing in Ohio and Arizona for more than 20 years. Following Elva’s death in 1968, Rollon re-married Joyce Showes-Green in 1972. His marriage to Joyce, blessed his life with her daughter, Cyd Charrise (Green) Williams. Rollon continued working for the Postal Service, retiring from this career and the Army Reserves simultaneously in 1981 on his 60th birthday. By then he had become a postal supervisor and a Major in The Army Reserves.. In 1999 Rollon moved to Phoenix, AZ spending 11 years near his oldest son Rollon Michael and daughter-in-law Olga. In 2010 he returned to Cincinnati where he continued a very peaceful retirement under the watchful eyes of his youngest son Kenneth and daughter-in-law Carolyn. Rollon was preceded in death by his father Manning Thompson; his mother, Roxanne Bittle; step-mother, Daisy Thompson, his brother, Australia Thompson and his wife and mother of his children, Elva Thompson. His amazing legacy will forever be cherished by his sons, Rollon (Olga) Thompson (Phoenix, AZ) and Kenneth (Carolyn) Thompson of Cincinnati; his daughter, Dr. Cyd Williams of Marrieta, GA; Grandsons Marq Thompson (Euless, TX), Kai Thompson (Columbus, OH), Ryan Thompson (Cincinnati, OH); Granddaughter RaGann Gipson (Cincinnati, OH); Great -Grandsons CeVaughn Gipson and Christian Gipson (Cincinnati, OH), Great-Granddaughter Aidyn Applegate (Ft. Walton Beach, FL). He will also be dearly missed by a multitude of friends and relatives along the East Coast, from New York to South Carolina and West to Arizona that he touched on his journey.

The family of Rollon McKeith Thompson created this Life Tributes page to make it easy to share your memories.