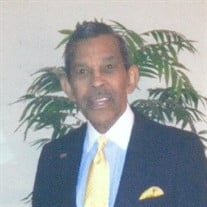 Ricci Byrd II, (Rick) 74, of Cincinnati, Ohio, passed away at his home on Sunday, September 21, 2014 surrounded by the love of family and friends. He was born in Brooklyn, New York on March 26, 1940 to Ricci & Leonora Byrd. Ricci grew up in Jamaica, New York and graduated from high school in 1958. He joined the U.S. Air Force in 1959. Upon leaving the military service, he attended college and studied electronics. Ricci married Angela Nooks Jones in 1972, in Cincinnati, Ohio . Their 42-year, happy union was blessed with one daughter, Ashara. Ricci was a life-time member of The 100 Black Men and he enjoyed racket ball, football, music (Jazz and Doo Wop) and debating. After working in the field of electronics in several hospitals and health institutions, Ricci’s interest turned to the field of medicine in general, and acupuncture in particular. His desire to learn acupuncture led him to study in Peking, China and then complete his studies in Montreal, Canada. He graduated from the Acupuncture Association of Quebec, Inc. with a Doctorate in Acupuncture. In 1979, Dr. Ricci Byrd received his California State Certification in Acupuncture. Dr. Byrd served as assistant administrator at the Western Park Hospital of Los Angeles, California. From 1979 through 1989, Dr. Byrd practiced acupuncture under the auspices of Dr. Randall Maxey. Dr. Byrd relocated to Cincinnati, Ohio in 1990 and resided there until his death. Ricci was preceded in death by his father Ricci Byrd, his mother Leonora and his brother, LeRoy. Ricci is survived by his spouse, Angela of Cincinnati Ohio; his daughter, Ashara Byrd and son-in-law, Joe Brockhaus of Austin, Texas; his sister, Roberta and his brother-in-law, Emilio Bernal of Atlanta, Georgia; brother-in-law, John Reed Jr. of Detroit, MI; his sister-in-law, Carolyn and brother-in-law, Will Teague, of Cincinnati, Ohio; his niece, Lauren and her husband, Robert Payne of Columbus, Ohio; his nephew, Will Ryan Teague of Atlanta, Georgia; grand-nephews, Robbie and Chase Payne of Columbus, Ohio. His memory will forever be treasured by a host of other relatives and friends.

Ricci Byrd II, (Rick) 74, of Cincinnati, Ohio, passed away at his home on Sunday, September 21, 2014 surrounded by the love of family and friends. He was born in Brooklyn, New York on March 26, 1940 to Ricci & Leonora Byrd. Ricci grew up in... View Obituary & Service Information

The family of Mr. Ricci Byrd II created this Life Tributes page to make it easy to share your memories.

Send flowers to the Byrd family.