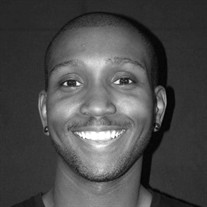 Celebrating His Spirit “Oh Lord my God, I cried out to You, And you healed me.” Psalm 30:2 (NKJV) Ralph McClinon was born on November 21, 1989 to the proud parents of Charles McClinon, Sr. and Angela Floyd-McClinon. From day one Ralph lived life on his terms.... tenacious, vivacious, invincible. On July 11, 2016, he surrendered his life into the arms of The Lord. Prior to his birth, his doctors predicted that he would share his birthday with his father. Ralph, however, opted to have his own day. Immediately following his birth, physicians diagnosed problems with his heart. By the time he was five months old, Ralph received open heart surgery at Cincinnati Children’s Hospital Medical Center. Physicians predicted that he would either be very sickly or very strong. In typical fashion, Ralph decided to be strong. At an early age, Ralph was baptized at Southern Baptist Church, under the leadership of Rev. James E. Milton. His road to salvation continued at Zion Global Ministries under the leadership of Freddie T. Piphus, Jr. Tenacity, determination and vigor became foundations for his lifestyle, all of which he demonstrated throughout school. He attended Eastwood Paideia, Our Mother of Sorrows and Harmony Community School (HCS). It is at HCS where Ralph played his first instrument—the drums. He earned a diploma from the School for Creative and Performing Arts (SCPA). While attending SCPA, Ralph excelled in creative writing, vocal performance and instrumental music. Ralph played six instruments and learned to read music at an accelerated rate. Although he was too young, he played with Cincinnati Symphony Youth Orchestra in the seventh and eighth grade as a percussionist. He was widely known for playing the tenor saxophone in the jazz band. He completed his first year of college at Central State University, Wilberforce, OH. Ralph transferred to his dream school, Berklee School of Music, Boston, MA. While living in the Boston area he gained many friends and followers of his compositions, vocal training and keen ear for pitch. God graced Ralph with a special light. He was gifted, yet had an amazing capacity to love and encourage others—especially those who considered themselves an underdog. His magnetic personality did not go unnoticed. The Amicable Lodge, Ancient Free & Accepted Masons, the oldest masonic lodge in Cambridge, Massachusetts, opened its arms and heart to Ralph as a dedicated brother to its cause. And friends from coast to coast, affectionately called him “Ralphie.” After sharing his eclectic sound on his CD, “Identity,” Ralph visited his best friend, Alfred Gover, in North Carolina. Alfred was instrumental in encouraging Ralph to live out his dreams and to become healthier. Ralph took on the challenge to change his lifestyle and to lose 100 pounds. The weight loss and disciplines were to prepare him for his heart transplant. While visiting Alfred, Ralph became very ill. Physicians decided it was time for Ralph to pursue a heart transplant. At the age of 26 Ralph was flown from the hospital in North Carolina to Cincinnati Children’s Hospital Medical Center. Gruschen Veldtman, MD, a specialist in Adult Cardiology, agreed to be in charge of Ralph’s health. The team at CCHMC Adult Cardiac unit came to know Ralph well. Ralph wanted to do things his way. He did not want to be a burden to others and to depend upon artificial means to maintain his life. Hours before he went home to be with the Lord, the medical team was more hopeful than ever to schedule the heart transplant procedure. When Ralph closed his eyes for the last time, peace became his best friend. Pain was no longer the ruler of his life. His conversation with God was filled with questions. At 2:55 p.m., July 11, 2016 God answered all of Ralph’s questions and said, “Come home son.” Ralph will forever be cherished by his parents, Angela Floyd-McClinon and Charles (Tamara) McClinon, Sr.; his brother, Charles McClinon, Jr.; grandparents Ralph and Betty Floyd; closest cousins, Jasmine, Maya and Ricky; aunts, Tammi (Rotzi) Combs, Anita (John) Burton ; Ruby (Arthur) Harris , Roberta McClinon, Jewell McClinon, Bernadette McClinon and uncle, Rudy (Elissa) McClinon . He will also be celebrated by a host of first, second and third -generation cousins and friends from coast to coast.

Celebrating His Spirit &#8220;Oh Lord my God, I cried out to You, And you healed me.&#8221; Psalm 30:2 (NKJV) Ralph McClinon was born on November 21, 1989 to the proud parents of Charles McClinon, Sr. and Angela Floyd-McClinon. From day one... View Obituary & Service Information

The family of Ralph Mathew McClinon created this Life Tributes page to make it easy to share your memories.

Celebrating His Spirit
“Oh Lord my God, I cried out to You, And...

Send flowers to the McClinon family.