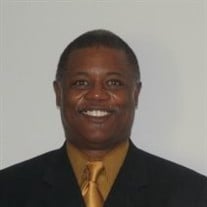 Peter Wallace Maxberry Jr. was born on May 8, 1953 in Cincinnati, OH. He was the second child of Peter Maxberry Sr. and Elmira Maxberry (West) who preceded him in death. Peter graduated from Walnut Hills High School in Cincinnati, OH and earned an Associate’s Degree from Cincinnati Technical College in Computer Programming. He began his career in Cincinnati, but truly began his professional career working for American Airlines. American Airlines took Peter to Tulsa, Oklahoma and finally to Dallas, TX. He worked for 31 years for American Airlines and its subsidiary, Sabre Inc. Peter is survived by his son, Damon Jones (Holly) and Grandchildren Damon Jones, Bryan McCorvey, Jasmine McCorvey, and Jordan Jones and by his Great Grandson Malachi Jones, all of Cincinnati, OH. He is also survived by his beloved sister, Myra Lynn Maxberry Green of Phoenix Arizona, Step-Mother, Marcella Smith, Step-sisters, Teresa Hill and Regina (Robert) Ingram of Cincinnati and Step-brother Eric (Candy) Abernathy , of Jacksonville, FL. He is also survived by several nieces and nephews who knew him as “Uncle Petey”. He is also survived by two special “brothers” Dr. Clyde Henderson (Janice) and Lucius “Carl” Smedley (Letha) of Cincinnati, OH. Peter was baptized at a very early age at Bethel Baptist Church in Cincinnati, where he was a faithful member for over 25 years. Peter concluded his service to the Lord at Oak Cliff Bible Fellowship in Dallas, Texas where he served for more than 20 years. He served in many capacities for his home churches, especially serving as a member of the choir and praise teams. A lover of sports, Peter was a longtime softball player, an avid bowler and golfer. He travelled to many places and never met a stranger. Like his father before him, he also enjoyed photography. He was a giver of his time, heart, and anything else that his loved ones needed. We will greatly miss Peter as he was a wonderful father, sibling, and friend.

Peter Wallace Maxberry Jr. was born on May 8, 1953 in Cincinnati, OH. He was the second child of Peter Maxberry Sr. and Elmira Maxberry (West) who preceded him in death. Peter graduated from Walnut Hills High School in Cincinnati, OH and earned... View Obituary & Service Information

The family of Mr. Peter Wallace Maxberry Jr. created this Life Tributes page to make it easy to share your memories.

Send flowers to the Maxberry family.