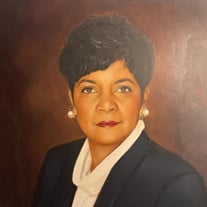 Ms. Cooper's Memorial services will not be scheduled until some time next year by the family. Will post when we are notified. Celebrating a Life well Lived Minette J. Cooper was born on August 19, 1947 in Atlanta, Georgia to Minnie and Curtis Norris. She departed this life on August 8, 2021, leaving a legacy of family, friendship and a community she greatly improved. She grew up in Indianapolis, Indiana, where she attended Indianapolis Public Schools. Minette furthered her education at Howard University, Washington, D.C, where she received a Bachelor of Arts in education. She taught elementary school in Washington prior to moving to Cincinnati with her husband, Emmette G. Cooper. Minette and Emmett were married on November 4, 1967. The Coopers were blessed with three children; Emmett Jr., Curtis and Minette Cooper, all of whom they raised to value family, education and business. Minette was an extremely passionate, confident, hard working and a fearless woman. She raised three incredible children, served as chief consultant of Cooper & Associates, and ran for office three times, starting with The Cincinnati School Board in the early 90s. In 1995 she successfully campaigned for Cincinnati City Council. During her six-year stint on council, Minette played a key role in Cincinnati’s collaborative agreement. The ground-breaking legislation, which mandated cameras in the city’s police cruisers, improved neighborhood safety. Her former co-workers remember her as, a “true public servant,” a champion of youth and friend to many.’’ Minette served Cincinnati as Vice Mayor, Finance Chair, Health and Human Services Committee Chair and Economic Development Committee Chair. She was also a member of Girl Friends, Inc. and The Links, Inc. Her board memberships include: The Cincinnati Museum Center, The Salvation Army, The NAACP, The North Avondale Business Association and The Women’s City Club. Her incredible spirit will forever be cherished by her husband, Emmett Cooper ; children, Emmett Cooper, Curtis and Jasmine Cooper and daughter, Minette Cooper ; her siblings, Curtis Norris Jr. and sister, Henri Norris; Grandchildren, Justin, Curtis, Sala, Chris, Diana and Adrian; Nieces and Nephews, Candance, Adrienne, Hewitt, Cherese, Gerald, Jody, Davon, Everett, Laura, Evelyn, Tanya, Gina, Jana, Bennett, Karl, Aaron, Allison, Wendy, Traci India, Kira, Jared, Jason and Mara. She will also be dearly missed by a host of other relatives and far too many friends to count.

Ms. Cooper's Memorial services will not be scheduled until some time next year by the family. Will post when we are notified. Celebrating a Life well Lived Minette J. Cooper was born on August 19, 1947 in Atlanta, Georgia to Minnie and Curtis... View Obituary & Service Information

The family of Minette J Cooper created this Life Tributes page to make it easy to share your memories.

Ms. Cooper&#39;s Memorial services will not be scheduled until some...

Send flowers to the Cooper family.