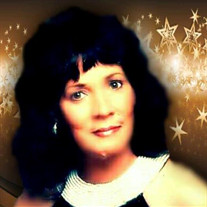 A Phenomenal Woman… Marquetta Tonya Crayton was born to Floretta and Theodore Penebaker on March 14, 1953 in Cincinnati, Ohio. Marquetta took her mother and daughter's hands to be with the Lord on December 31, 2015. Marquetta had a huge heart and infectious personality that was felt by all who were blessed with her presence. She began her education at Blessed Martin in Lincoln Heights and Glendale Elementary.  She continued her educational journey at Princeton Middle and High Schools. She later became a Buckeye while attending Ohio State University. Marquetta never turned anyone or anything away, whether it be a child, adult or animal. Her loving spirit is known by the many loved ones she adopted. Her nine nephews and seven nieces were not enough for her. She was overjoyed to be a grandmother of nine and spoil "Nanny's Crew". Her grandchildren were the greatest gift she could have ever been given and she lived for all of them. And she took every opportunity to let them know she loved them. Marquetta will be missed greatly by all who will remember her for her contagious smile, partying personality and uplifting spirit. She was preceded in death by her daughter, Susan Jane Crayton; her mother, Floretta Penebaker; her father, Theodore Penebaker; her aunt, Gertrude Phelps; uncle Tom Williams and sister-in-law, Joyce Renfro Penebaker. She leaves to cherish her memory her son, Earl Crayton III and her daughters, Quiana Crayton-Williams and Brittany Crayton ; her husband , Sterlin Williams and her significant other, Robert Lyle; her brothers, Ted Penebaker, James Penebaker, John Penebacker, George Tinsley, Robert Penebaker, Eric Penebaker, and Wayne Penebaker; her grandchildren; her sister-in-laws and a host of nieces, nephews, cousins and other family and friends.

A Phenomenal Woman&#8230; Marquetta Tonya Crayton was born to Floretta and Theodore Penebaker on March 14, 1953 in Cincinnati, Ohio. Marquetta took her mother and daughter's hands to be with the Lord on December 31, 2015. Marquetta had a huge... View Obituary & Service Information

The family of Marquetta Tonya Crayton created this Life Tributes page to make it easy to share your memories.

Send flowers to the Crayton family.