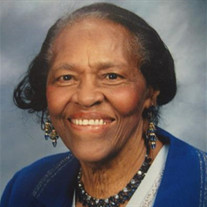 LIFE REFLECTIONS Mamie Davis Jackson, born in Greenville South Carolina on November 14, 1919, was the fifth child of the late Lila and Judge Sherman. Mamie, aka the Flame ,came with her family to Cincinnati at an early age and attended and Jackson Elementary School and Woodward High School. Mamie was employed as a cook, housekeeper, and hotel maid before following her brother John (Sonny) and his wife Edna as employees of the S.S. Delta Queen. She worked on the Queen for fifteen years having achieved the position of Head Maid. She joined the housekeeping staff at the University of Cincinnati and remained there until her retirement. In As a young adult, Mamie became a founder of Inspirational Baptist Church and was instrumental in making it one of the most respected religious institutions in Greater Cincinnati. She served on the usher board and occupied many leadership in the church over the years. In the community was active in clubs such as the Silver Dollar Club and Secret Pals. She organized social events, fundraisers, bus trips, and a variety of neighborhood parties. Mamie was a helper, mediator, counselor, and supporter. All of her homes welcomed those in need – family, friends, and acquaintances. Mamie saw nine children achieve adulthood. Those children who preceded her in death were Robert C. Davis, Laura Elaine Davis, Alfreda Davis-Early, Willa Mae Batchelor, Brenda T. Davis, and Phillip M. Davis. She was also preceded in death by her siblings. Ann Marie Glasper, William Lee Sherman, Nell Tolliver, Irene Sherman, Alma Leaks, and John Calvin Davis. Mamie she leaves her sons Anthony D. Davis, William C. Davis and Rodney Davis and daughter Georgia Mae Lowry. She is survived by numerous grandchildren, great grandchildren, nieces, nephews, cousins, friends and others who will miss her presence.

LIFE REFLECTIONS Mamie Davis Jackson, born in Greenville South Carolina on November 14, 1919, was the fifth child of the late Lila and Judge Sherman. Mamie, aka the Flame ,came with her family to Cincinnati at an early age and attended... View Obituary & Service Information

The family of Mamie E. Davis Jackson created this Life Tributes page to make it easy to share your memories.