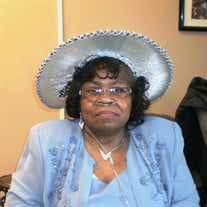 Lillie Bell Southerland June 27, 1947 August 1, 2016 First Lady… Lillie Southerland, affectionately known as, “Lillie Bell,” peacefully made her transition from this life into the arms of The Lord on August 1, 2016, in the peace and comfort of her home, surrounded by the love of her husband and children. She was born on June 27, 1947 in Cincinnati, Ohio, the only child blessed to the union of James and Minnie Stanley. Lady Southerland, baptized at an early age, attended St. Paul A.M.E. Church. She always knew that God had a plan and a purpose for her life. Lillie attended Cincinnati Public Schools and furthered her education at Courter Technical Adult High School. It was at Courter Tech where Lillie, wearing her famous “blue dress,” caught the attention of her childhood sweetheart, George Southerland. Lillie and George married in 1967. Their union was blessed with two sons, Terry and Kendrick. In 1971, Lady Southerland joined The First Baptist Church of Cumminsville, where she would later rein as First Lady. She held many positions in corporate America throughout her career, which she began as a 16-year-old fashion model for the former Shillitos Department Store. Lillie later joined Channel 5 WLWT, where she juggled multiple duties. One of her assignments, which she spoke of fondly, was working with the team that produced the “Uncle Al and Captain Wendy Show.” She also worked for JC Pennys, which was not only her job but her favorite No. 1 go-to-place for shopping. Everyone in the family, without a doubt, knew that their gift was going to come for JCPennys! Although Lillie was skilled at multi-tasking, she wore the most hats, literally, in her role as First Lady at First Baptist. Lady Southerland helped spearhead the Unity Day Tea, helped organized community fund raisers and let us not forget about her musical talents. Lillie, blessed with a “songbird” voice, lead songs in worship services. She also visited the sick’n shut in, always leaving an “angel” to give them for comfort. Lady Southerland took her position as First Lady very serious and regardless of her illness, kept pushing and moving for the works of the Lord. Her desire to know more and do more for the Lord fueled her hunger for more of his word. She earned her certificates in Old Testament Survey, New Testament Survey, Biblical Background, Homiletics Studies, Hermeneutics and Christology. She was preceded in death by her parents, James and Minnie Stanley. Lady Lillie B Southerland leaves behind to cherish her memory and to continue on her legacy her high school sweetheart and devoted husband Pastor George F. Southerland; her two sons, Terry (Grace) Southerland of New York, NY and Bishop Kendrick (Enethia “Tiny” ) Southerland; three grandchildren, Antoine (Lashawnda) Hudson, LaKendra McCreary and Ashaa Southerland; three great-grandchildren, Shawnice, Shawntel and Lil Miss Raven; one cousin, whom she loved like a sister, Dellena Carson; one very best friend since second grade, Mrs. Flora Sayles, whom she also loved like a sister and one special cousin, Sonya Williams. Lady Southerland will also be dearly missed by a host of nieces, nephews, cousins and friends, all of whom she expects to carry on the flame of love and devotion in the matchless name of Jesus.

The family of Mrs. Lillie B Southerland created this Life Tributes page to make it easy to share your memories.

Send flowers to the Southerland family.