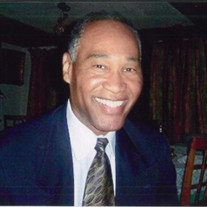 Here is the link to watch the services online https://www.youtube.com/embed/m7PK6mBj-6w (Due to the current Covic-19 pandemic masks will be required for the public visitation and the private funeral service. The private funeral is by invitation only.) Celebrating His Spirit Lawrence Charles Hawkins, Jr. December 17, 1944 – May 27, 2020 Lawrence Charles Hawkins, Jr. was born December 17, 1944 in Cincinnati, Ohio to the union of Dr. Lawrence Charles Hawkins, Sr. and Madora Earline Thompson Hawkins. Lawrence, who devoted himself to God, his family and serving others, departed this life on May 27, 2020. Lawrence, who was affectionately called "Lonnie" by family and friends, grew up in a loving household with his younger brother, Wendell. At a young age Lonnie began participating in many activities including basketball, baseball, fencing, ping pong, tennis, volleyball and playing the trumpet. He graduated from Walnut Hills in 1962 and continued his education at The University of Cincinnati. He graduated from UC in 1967 with a Bachelor of Arts, majoring in Psychology. During his years at UC, he joined the United States Air Force Reserve Officers Training Corp. After graduation, he headed to his first Air Force assignment, which was pilot training at Reece Air Force Base in Lubbock, Texas. After six months of flight school, he was transferred to Wichita, Kansas, where he served as Supply Operations Officer at McConnell Air Force Base for four years. In June of 1971, Lonnie earned the rank of Captain and his honorable discharge from the Air Force. His love for Karate occurred during college when his curiosity made him wander into Yoseikan Karate School in Covington, Kentucky. He fell in love with the art and became a licensed instructor. He opened his own dojo, Yoseikan II Karate School in 1972 and, as Chief Instructor, achieved the rank of eighth degree black belt. Upon his return to Cincinnati in 1971, Lonnie was hired by Procter & Gamble as a buyer. During that time he rose through the ranks from Buyer to Director of Global Contract Manufacturing. He retired from P&G in 2000. While working at P&G, he began studies at The Salmon P. Chase College of Law. He received his Juris Doctorate and was admitted to the bar in November 1975. Upon retirement from P&G, he continued his private practice of law. Lonnie was a devoted servant leader of church his entire life. In elementary school his family attended First Baptist Church in Walnut Hills, then moved to Gaines United Methodist Church in Madisonville, where he served as president of the Methodist Youth Fellowship, and later on The Board of Trustees, Pastor Parish Relations Committee and Trustee of the Gaines Memorial Endowment Fund. More recently, Lonnie was a member of St. Barnabas Episcopal Church in Montgomery where he served as a Vestry Member. Lonnie, blessed with a keen sense of humor and an erudite vocabulary, was always the life of the party. He was loquacious, dignified, and impactful. He delighted in coaching others to become their “best self.” To say he was smart is an understatement. There wasn’t much he didn’t know, including a penchant for languages. His wit was quick and pointed and left others speechless. One of his favorite retorts was, “You have to admit that it was ‘objectively’ funny!” He generously gave to others and delighted in finding them the “perfect” gift. He traveled extensively and particularly liked beach locales. He enjoyed family gatherings, sumptuous meals and fine dining. His other passion was giving the gift of music to others through his life-long love affair of the trumpet. It’s been told that as a child he once showed up for a recital at First Baptist, but had purposely forgotten the key to his trumpet case, thus missing his opportunity to perform... to the chagrin of his parents. Lonnie started playing his trumpet in his youth for church recitals and The Walnut Hills High School Band. When he was in ROTC in high school he also frequently played “Taps” for military holiday programs. Lonnie’s enjoyment of performing for an audience sparked his recruitment of other musicians. He formed the “Under Cover” jazz band in 1995. Under Cover performed at community events for many years... often gratis because they just loved playing. Lonnie’s community service included his membership in the Boule Sigma Pi Phi Fraternity, Wesley Child Care Center Board, Walnut Hills High School Alumni Associate Trustee, Kids Helping Kids Board of Trustees, Dohn Community High School Board, and Board President of ProKids – to name just a few of his many community contributions. Lonnie was preceded in death by his parents, Dr. Lawrence Sr. and Earline and his brother Wendell Hawkins. Lonnie leaves to cherish his memory his devoted wife, Jane, of 32 years; their daughter Lauren and his son Lawrence III (Nicole); Grandchildren Leah and Lawrence IV. Lonnie will also be dearly missed by a host of cousins, nieces, nephews, brothers-in- law, sisters-in-law, and a community of friends. In lieu of flowers, the family request that donations be made to the ERS Foundation: Center of Memory Support & Inclusion, 3870 Virginia, Ave., Cincinnati, Ohio 45227 or to ProKids, 2605 Burnet Avenue, Cincinnati, Ohio 45219.

Here is the link to watch the services online https://www.youtube.com/embed/m7PK6mBj-6w (Due to the current Covic-19 pandemic masks will be required for the public visitation and the private funeral service. The private funeral is by invitation... View Obituary & Service Information

The family of Mr. Lawrence Charles Hawkins Jr. created this Life Tributes page to make it easy to share your memories.

Here is the link to watch the services online
https://www.youtube.com/embed/m7PK6mBj-6w

Send flowers to the Hawkins family.