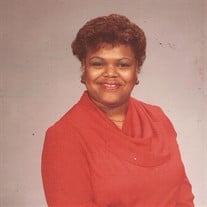 Joyce Denise Harris-Green was born on February 15, 1961, to the union of Betty Jane (Knighton) and William Matthew Harris, Sr. in Cincinnati, Ohio. On October 17, 2015, surrounded by the family she loved dearly, she went home to be with The Lord. Joyce, the oldest of three children, spent her formative years in Hollydale, OH., a close-knit, family oriented African-American community founded in 1947. Joyce found Christ at an early age and was baptized at Mt. Zion Baptist Church, Lockland, OH under the leadership of Rev. Otis Moss Jr. She attended and graduated from Princeton High School in 1979. Her patience, humor and generous spirit served her well in the retail, hospitality and her future career in the child care industry. She moved to Louisville, Kentucky in 2000, following the death of her father. Under the loving guidance of her grandmother, Mrs. Gwendolyn Finley, Joyce joined Zion Baptist Church in 2003. It did not take long for Joyce to become a dedicated member of her new church family. She served as president of the January/February Month Club and the Women’s Ministry. She was also a faithful member of the Funeral Ministry, Children’s Church and Vacation Bible School. Joyce also participated in Rev. Joiner’s ‘Amen Corner’. She LOVED Zion and even during her illness, rarely missed a Sunday morning service or an opportunity to serve. Her skills in the kitchen were legendary!! It was Joyce who cooked for family reunions and gatherings. Joyce’s frequent requests were for her mac and cheese, fried fish, greens and apple betty. Her humor, laughter and sense of play made all who encountered her the better for it. Joyce began her battle with breast cancer 18 months ago while living in Louisville. Her devotion to family was matched by the excellent advocacy and physical care by her sister, Aisha and brother and sister- in- law, William and Yaulonda. Her courage and grace stands as a testament to her faith and is an inspiration to us all. During this trial, she never uttered a complaining word, always inquiring about the wellbeing of others. Joyce never lost her hope and joy, but most of all she never lost her praise. She will be truly missed. Joyce leaves to cherish her memory her mother, Betty Pearson, Atlanta, GA.,; siblings, William Harris II (Yaulonda), Cincinnati, OH and Aisha Harris, Chicago, IL; grandmother, Gwendolyn Finley, Louisville, KY; uncle, John E. Harris, Jr.(Alice), Norfolk, VA.; aunt, Claudette Harris, Cincinnati, OH; special cousin, Jean Standifer and step-mother, Alicia Coggins-Harris, both of Cincinnati. Her memory will also be cherished by the loves of her life, nieces, Hadiya and Trinity and nephew, Moses (children of William and Yaulonda); cousins, John E. Harris III (Yulanda), Elizabethtown, KY., Pamela Harris, Killeen, TX, Darryl Harris, Cincinnati, OH, Makeda Harris, Fort Washington, MD.; special friend, Donald Dennis, goddaughter, Tecoria Fitzpatrick and the ‘apple of her eye’ her godson, Tyler Harris (DaDa), all of Louisville, KY and last but not least, her “BFF” Wendy Winters-Ward. She also leaves a host of other cousins and close friends, all of whom will mourn her passing. Services scheduled for Louisville, Ky on Oct. 31, starting with a 10 a.m. visitation with family, followed by Memorial service from 12 noon-2 p.m. at Zion Baptist Church, 2200 W. Muhammad Ali Boulevard, Louisville, KY., 40212. Repast will immediately follow. GREEN

Joyce Denise Harris-Green was born on February 15, 1961, to the union of Betty Jane (Knighton) and William Matthew Harris, Sr. in Cincinnati, Ohio. On October 17, 2015, surrounded by the family she loved dearly, she went home to be with The... View Obituary & Service Information

The family of Joyce Denise Harris Green created this Life Tributes page to make it easy to share your memories.