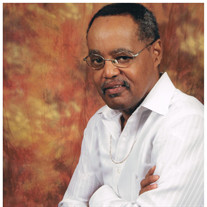 Celebrating His Spirit John Granville Little Jr. was born on Feb. 21, 1950 at Cook County Hospital to Leola (Blackman) Collins and John Little Sr. He departed this life on May 12, 2017 into the arms of The Lord. John, who accepted Christ at an early age, joined Southern Baptist Church and later moved his membership to Greater New Hope Missionary Baptist Church, where he was a dedicated member for more than 20 years. Affectionately known to friends and family as “Big Topper,” John graduated from Courter Technical High School. He enlisted in the U.S. Navy in 1969 and earned the rank of Petty Officer Third Class during his two years of active duty. He then enrolled into the Naval Reserve, where he later received an honorable discharge on April 13, 1975 and returned to Cincinnati. John then went to work for The Overhead Door Company, where he earned the distinction of becoming the company’s first black foreman. He had a big heart and went out of his way to help others. He lived modestly but was always willing to share, although he lived on a tight budget. He willingly donated his time and love to Greater New Hope, where he proudly served as an usher. In his spare time, John loved to fish and spend time with his children and grandchildren. John’s memory will forever be cherished by his four children, Michael ( Erica) Williams, Sheri (Walter) Simmons, Jonathan and Danielle Little; one brother, Mark Blackman, Jr.; his uncle, Peter Collins, Sr.; his 12 grandchildren, Tyler, Tyrell, Myles, Malik ,Carla, Santia, Melonie, Jaslynn, Landyn, Londyn, Jonathan, Jr. and Jonathan; two great-grandchildren and a host of other family and friends. God’s work in our life puts a new song in our heart”

Celebrating His Spirit John Granville Little Jr. was born on Feb. 21, 1950 at Cook County Hospital to Leola (Blackman) Collins and John Little Sr. He departed this life on May 12, 2017 into the arms of The Lord. John, who accepted Christ... View Obituary & Service Information

The family of John Granville Little Jr. created this Life Tributes page to make it easy to share your memories.

Send flowers to the Little family.