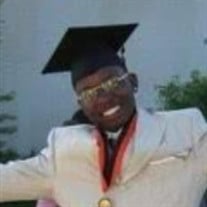 Celebrating His Spirit Joe Jamar Brantley , affectionally called “Crack Daddy,” was born on March 7, 1990 in Cincinnati, Ohio. He was the baby boy of Lisa Brantley and the only son of Joe Tanner. Joe was born a happy baby with a big smile on his face. His family did not realized that their happy baby boy was born with several health issues (Vaters Syndrome, chronic asthma and chronic bowels/ bladder syndrome) . But he proved to everyone that he was a survivor and was a true blessing to his family. With all of his health problems, he never stopped living his life to the fullest. He attended Withrow International High Schools, where he received his high school diploma with honors. He later attended Soar ,where he received his associates degree. Joe also became a great father to three amazing children, who loved everything about their dad! Joe enjoyed working with his hands, especially when it came to drawing, writing (music) and cutting hair. The biggest day in his life was the day he became a father. Family was everything to him. His smile would always light up a room. To know Joe was to love him. Joe showed and expressed his love for people in many different ways. We, his family and friends, will truly miss his smile that always brightened our day. He leaves to cherish his memory his parents, Lisa Brantley and Joe Tanner; bonus father Ramando Williams; his daughter, Ja’Lisa Brantley; two sons, Rapheal Knight and Marquez Harris; his brother, Paul Brantley; four sisters, Amanda Brantley, Tara Hill, Tia Thomas and Rashanda Hill; his grandmother, Margaret Barnes; aunts, Tara Shears, Cherron Murry, Frances Brantley, Paulette Gordon and Angela Thomas; uncles, Shawn Shears. (His four uncles and four aunts on his father’s side. He will also be missed by all of his sister/cousins, brother/cousins and friends who will miss him dearly!!

Celebrating His Spirit Joe Jamar Brantley , affectionally called &#8220;Crack Daddy,&#8221; was born on March 7, 1990 in Cincinnati, Ohio. He was the baby boy of Lisa Brantley and the only son of Joe Tanner. Joe was born a happy baby with... View Obituary & Service Information

The family of Joe Brantley created this Life Tributes page to make it easy to share your memories.

Send flowers to the Brantley family.