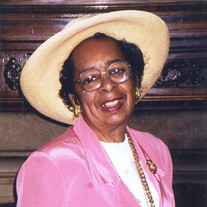 Janet Stanback Dumas, the eldest of nine children, was born in Prairie, Alabama on December 14, 1914 to the union of Isaac Lafayette and N. Lavinia Dumas. She departed this life on Dec. 29, 2014 to be with The Lord. Janet received her early education at the Presbyterian Mission Schools of Wilcox County, Alabama and Fisk University in Nashville, Tennessee. Both of her parents were educators and missionaries for the Presbyterian Church in Alabama and later Mississippi. Janet graduated cum laude at the age of 19 from Tennesse State A. & I College in June 1934, with a BS degree in Math. She taught for several years in West Tennessee before matriculating at the University of Cincinnati (UC), where she received a Masters degree in Counseling. She met her future husband, Charles F. Keys, at the University of Cincinnati. They were united in marriage on July 14, 1939 in Nashville, Tennessee and had a 49 -year love affair until Charles’ death. Their union was blessed with two daughters, Janet Lucia and Carolyn Lavinia. Janet was a teacher in the Cincinnati Public School System (CPS), where she taught math at the Harriet Beecher Stowe Junior High School and Bloom Junior High School (formally known as “Old” Woodward High School). She also worked as a counselor at Bloom before being transferred to counsel at the “New” Woodward High School. Mrs. Keys was an educator for over 35 years, of which 29 were spent working for Cincinnati Public Schools. She was very active in the community, church and civic affairs during her career and during her retirement. Janet was a member and Elder of Carmel Presbyterian Church. She joined Carmel in 1938, serving as Director of Summer Bible School, Chairman of Sunday Service Committee and Director of Community Ministry. Janet was inducted into the Alpha Psi Chapter of Alpha Kappa Alpha Sorority in 1932 at Tennessee State A. & I. College. Janet chaired Sigma Omega’s annual theatrical play to raise funds for the group’s annual college scholarships. She was awarded “ Diamond Soror’’ for over 76 years of service to her beloved AKA. Janet’s many activities and contributions included life-time membership in the NAACP, for which she served as Education Chair during the NAACP’s Education Desegregation Suit with the City of Cincinnati; past president and member of Jack and Jill, Inc.; member of the Urban League; a 2000 “Glorifying the Lions” award recipient; a member of the Optimist Welfare Club, from 1956 until her passing; the YWCA-West End member, where she served as an Advisor to the Y-Teens Club and on the Management Committee; The Ohio Association of College Admissions Counselors and as a Docent at the Khon Conservatory. She was also an active member and speaker of the Charter Committee of Cincinnati; twice president of the Pan City Garden Club; a member of the Federated Garden Clubs of Greater Cincinnati; a Conservation and Environment Chair and Judge of the State of Ohio Horticulture Division, winning the 1933 Revolving Trophy for “Best Collection” in the horticulture Division. Janet greatly enjoyed and was an avid traveler, visiting all states in the United States, with the exception of Alaska, and all of the Continents except Antarctica and Australia. Her travels also included North Africa, Switzerland, Scotland, England, Spain, France, Brazil, the Netherlands, Japan, China, Russia, Singapore, Thailand, Canada, Mexico and many of the Caribbean Islands and other countries. She was preceded in death by her beloved husband, Charles F. Keys; sisters, Frances Joyner, Evelyn D. Mitchell and Nettie Lavinia Battle; brothers, Isaac L. Dumas Jr. and Thomas Milton Dumas; grandson, Michael Spencer Malone Janet leaves to mourn her passing daughters, Janet Keys Benson, Carolyn Keys (Anthony) Malone; grandsons, Carl A. Benson, Jr., Christopher F. Benson, Anthony Paul Malone, Jr., and Martin Andrew Malone; great-grandchildren, Charles Malone and Lauren Benson, her sisters Martha D. Mansker and Helen Hampton Cochran and a host of nephews, nieces and other family members and friends.

Janet Stanback Dumas, the eldest of nine children, was born in Prairie, Alabama on December 14, 1914 to the union of Isaac Lafayette and N. Lavinia Dumas. She departed this life on Dec. 29, 2014 to be with The Lord. Janet received her early... View Obituary & Service Information

The family of Janet Stanback Dumas-Keys created this Life Tributes page to make it easy to share your memories.

Janet Stanback Dumas, the eldest of nine children, was born in...

Send flowers to the Dumas-Keys family.