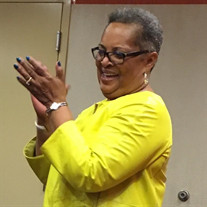 Jacqueline “Jackie” Wallace…her journey “To know how much there is to know is the beginning of learning to live”. Dorothy West Jacqueline “Jackie” Kay Sroufe Wallace was born in Ripley, Ohio on January 26, 1949. She was the eighth of nine children born to Stanley and Florence Sroufe. She was called home to her heavenly Father on March 19, 2016 at the age of 67. Jackie attended Eastern Brown High School ,where she graduated in 1967. After high school, she continued her academic studies at the University of Cincinnati where she received her Bachelors of Science in Education. Jackie began her teaching career for Cincinnati Public Schools at Cummins Elementary. Over the years as a school teacher, Jackie taught at North Avondale, Cheviot and Mount Airy Elementary Schools. Jackie’s passion for education did not end when she retired. She began working at the National Underground Railroad Freedom Center, where she worked as the Manager of Education. Jackie was promoted to Director of Education and after a brief time away, she returned to the center as the Manager of Education Initiatives. She was a long-standing member and supporter of Carmel Presbyterian Church. It was at Carmel where she met her life- long love, Clarence. The couple wed on April 26, 1980 and their union was blessed with one daughter, Allison. Years later Jackie became a grandmother to Jordan. She and Clarence raised Jordan as their own. And as a great-grandmother to John and Zenobia... she found ultimate joy! During her husband’s tenure as pastor of Carmel, Jackie served as a teacher of the church’s summer program and eventually as the program coordinator. Jackie also served on the usher board, sang in the inspirational choir and was an elder in the church. Anyone who truly knew Jackie knew that she had a passion for shopping, especially purses. She also had a favorite past time of going to the “boat” (casino), where she enjoyed playing slot machines. To know Jackie is to know a woman who lived life in Christ and to the fullest. Jackie is preceded in death by her husband, The Reverend Clarence S. Wallace; her parents, Stanley and Florence Sroufe; six siblings, Victoria Elaine Sroufe, Frances Ross (Clifford), Stanley Sroufe Jr., Linda Sroufe Allen, Doris (Wilbur) Jenkins and William Sroufe. Her memory and love of life will always be celebrated by her daughters ,Angela Elaine Sroufe of Tampa, Florida and Allison Danielle Wallace of Atlanta, Georgia; four granddaughters, Jordan Danielle (Mandel) Kilgore of Cincinnati, Ohio; Madison Danielle Sroufe, Tyler Danielle Sroufe and Nydia Sepulveda of Tampa, Florida; two great-grandchildren, John Ortiz III and Zenobia Kilgore , both of Cincinnati ; two brothers, Gordon Sroufe and Ronald Sroufe of Columbus, Ohio. Jackie is also survived by a host of nieces, nephews, other relatives and friends. We thank God for the beautiful life of Jacqueline “Jackie” Wallace. She taught us to love unconditionally, live life to the fullest, and to always do your best. Interment Spring Grove Cemetery Saturday March 26, 2016 at 10 a.m. (Please meet at Carmel Presbyterian Church 9 a.m. We will leave for cemetery at 9:30 a.m.) Repass will be held at the National Underground Railroad Freedom Center at 11 a.m. 50 E. Freedom Way Cincinnati, Ohio 45202

The family of Jacqueline Kay Sroufe-Wallace created this Life Tributes page to make it easy to share your memories.

Jacqueline “Jackie” Wallace…her journey
“To know how much there...

Send flowers to the Sroufe-Wallace family.