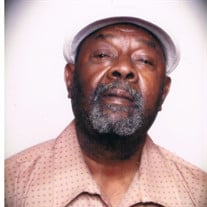 Celebrating His Spirit Howard Leonard Jones Sr. was born in Cincinnati, Ohio on Nov. 19, 1937 to the union of Myrtle Reed and Samuel Riley Jones. He departed this life, surrounded by the love of his family, on January 4, 2018 into the arms of The Lord. Howard, one of 15 children, grew up in Cincinnati’s West End community. He attended St. Joseph Catholic School and Taft High School, where he graduated in 1957 in Taft’s second graduating class. He left Cincinnati for U.S. Air Force training. Upon his return to Cincinnati, Howard married Joann Gilbert and their union was blessed with six children, all of whom he dearly loved. When it came to taking care of his family...Howard gave of himself 100 percent. He was a caring, a good father and hard-working provider for his family. He worked several jobs throughout his 29 year-tenure as a welder/machinist at The Powell Valve Company. One of those “extra” jobs was for the former Sheraton Gibson Hotel, now known as The Westin. When he wasn’t working, Howard focused his energy on his family. Howard made pancakes on weekend mornings for his children...each one so large it filled the plate. He also earned a reputation for his grilling skills, playing horseshoes and bowling on Sundays with his Frisco Bowling League.. He loved sports of all sorts. Howard celebrated holidays by buying new outfits for his children and fireworks on Fourth of July. His love of family and wonderful sense of humor has kept his house full of grandchildren, who lovingly called him “pawpaw,” and “Grandpa Jones.” Howard was also affectionately called “Uncle Lenny” by nieces and nephews, all of whom he treasured. He was preceded in death by his parents, Samuel and Myrtle Jones and his three siblings who died at birth; his six brothers, Harry, Albert, Leo, Samuel, Frank and Earl; his four sisters, Mary Catherine, Martha, Geraldine and Winona. He leaves to cherish his memory and to celebrate his legacy his two beloved sons, Jeffrey Jones and Howard (Stacie) Jones Jr. ; his four daughters, Sandra M Jones-Mitchell (Robert), Katherine Jones (Felton) Hocker, Karen (Ricky) Williams and Veronica Jones; one brother, Santos B. Jones of Boston, Mass.. He will also be dearly missed by 18 grandchildren, 20 great-grandchildren and one great-grandchild (on the way), along with a host of nieces, nephews, relatives and dear friends.,

Celebrating His Spirit Howard Leonard Jones Sr. was born in Cincinnati, Ohio on Nov. 19, 1937 to the union of Myrtle Reed and Samuel Riley Jones. He departed this life, surrounded by the love of his family, on January 4, 2018 into the arms of... View Obituary & Service Information

The family of Howard Jones created this Life Tributes page to make it easy to share your memories.

Send flowers to the Jones family.