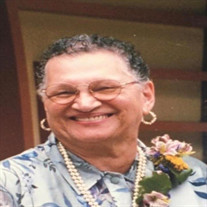 Celebrating Her Spirit . . . Mary Huckaby was born Helen Hillman on April 11, 1920 in Crittenden, Kentucky to the union of Fannie Mae (nee Jones) and Charles Bedford Hillman. She departed this life after 100 years, rich with history and a loving family, on April 27, 2020. Mary was an adult when she discovered that she was named “Helen” in honor of her maternal grandmother…although she was called “Mary Louise,” in honor her paternal grandmother. In 1922, Fannie was gifted a home from her mother-in-law, “Tante,” that was tucked away on a hillside in the woods. In 1928 the area was incorporated as North Avondale. Mary was raised in the house and attended North Avondale Elementary School. One of her North Avondale classmates, John Leahr, grew up to be one of the famous Tuskegee Airmen. After she obtained her education, she worked briefly at Wright’s Aeronautical Plant making airplane parts. She attended St. Andrew’s Episcopal Church, formerly located on 8th Street. She worked at Wright’s during World War II and saved her factory money for a house across the private drive from her childhood home. She married Lawrence Cleves Huckaby, upon his return from the war, on August 19, 1943. The couple began constructing a homestead in the one-bedroom frame house Mary had purchased. The house initially had no running water, indoor plumbing and only a coal stove. Nevertheless, Mary and Lawrence built an entire house around the original one-bedroom frame for their two daughters, Carole and Barbara. They added an extra bedroom, a kitchen, a garage,central air and a swimming pool. The couple also acquired adjacent lots where Larry built sheds, kept bees and managed extensive gardens. Mary was always there with a cold beer, a requested tool and/ or a piece of advice. As a reward for their efforts, the private drive was dedicated in their honor as “Huckaby Lane.” Mary was an independent throughout her life. She was an avid daily reader of all the local newspapers and faithfully followed The Cincinnati Reds. She was also a dog lover and enjoyed working cross-word puzzles and crocheting. The couple was active in the community and in their church congregation. They were always prepared to offer labor and bushels of fresh produce. Mary was a Golden Girl at Bethel Baptist Church and active with the Bond Hill Senior Group. Larry was a deacon at Bethel. Mary Huckaby celebrated her 100 th birthday while residing in Astoria Place of Cincinnati, located just around the corner from where she was raised. She often longed to sit on the porch of her house on Huckaby Lane and, “look into St. Bernard.” Other days she threatened to throw members of the Astoria home nursing staff down the iconic well standing on her nearby property. Her legacy on the hill continues with a fifth generation being raised in the secluded wooded enclave now maintained by her daughter Carole Douglas, son-in-law John Rochester and grandsons, Shadd, Todd and Jason Douglas. Mary was preceded in death by her husband Larry; daughter, Barbara Rochester; brothers, David, Charles, John and Harry Hillman and her sister, Clara Sheffield. Her memory will forever be cherished by her daughter, Carole; Grandchildren, Adam Shadd Douglas, Aaron (Annie) Todd Douglas of Chicago, IL and Aric Jason Douglas; son-in-law John Rochester, brother-in-law Walter Huckaby; four Great-Grandchildren Aric Douglas Evans of Fort Worth, Texas, Maeleigh Ryanne Douglas of Dayton, Ohio, Basha Elizabeth and Harper Rose Douglas both of Chicago, Illinois. She will also forever be cherished by a host of nieces and nephews who lovingly called her “Aunt Min” in reference to Cab Calloway’s 1931 hit, (Minnie the Moocher).

Celebrating Her Spirit . . . Mary Huckaby was born Helen Hillman on April 11, 1920 in Crittenden, Kentucky to the union of Fannie Mae (nee Jones) and Charles Bedford Hillman. She departed this life after 100 years, rich with history and a... View Obituary & Service Information

The family of Helen Mary Huckaby created this Life Tributes page to make it easy to share your memories.

Send flowers to the Huckaby family.