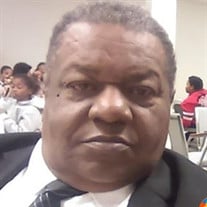 Celebrating of His Spirit Harvey Lee Benford Sr., 74, of Cincinnati , Ohio, was born in Nashville, Tennessee on July 13, 1943. He passed away on March 24, 2018, after losing his battle with Leukemia. Harvey moved to Cincinnati with his family at the age of nine. He grew up in Cincinnati and attended Central High School. Harvey married Deborah Ann Benford. His second marriage was to Tobie Jean Benford. These two marriages were blessed with nine children; Harvey II (Regina), Marcia, Joey (Towanda), Donna (Richard), Angela (Gary), Dorothy, Corey (Marea), Michael (Holly), and Georta; 25 Grandchildren; and 13 Great Grandchildren. His passion for working on cars with his father, the late John Warren Benford II, at a very young age evolved into a career with General Motors, where he worked for over 25 years. Harvey worked hard to provide for his family his entire life. Even when he retired, Harvey was active in his children’s lives always ready to assist wherever... and whenever he could. Even as a senior citizen, Harvey was very welcoming of change and aimed to stay current and relevant until his passing. He embraced social media, and was known for expressing his mind with no filters. If you were a friend of his children, he considered you to be his friend too-even if you had never met before-so you were likely to get a friend request from him. On one of his multiple Facebook accounts you’ll see that Harvey enjoyed “taking it easy.” He was preceded in death by his father John Warren Benford II; his mother, Alberta Hattie (Hunt) Benford; brother, John Warren Benford III; his sons, Joey Darnell Benford and Georta Valentino Mack. He will be missed dearly by his family, though they won’t hear him say, "BabyGirl" or "Son" anymore, they are comforted knowing that he passed with a smile on his face and that he is no longer suffering. His loving spirit will forever be celebrated by his children, Harvey II (Regina), Marcia, Donna (Richard), Angela (Gary), Dorothy, Corey (Marea), Michael (Holly) Benford; his brother, Eugene; his sister, Sharon; 25 grandchildren, Aden, Alexis, Anthony, Ariana, Avah, Cameron, Camiyah, Carli, Caylen, Chelsea, Davion, Daylin, Francesca, Hajsani, Heaven, Jahmaal, Kamylle, Kijah, Koreynne, Kymberlei, Landen, Mikhail, Naaman, Nicholas, Richai; 13 great-grandchildren, Alex, Andrejs, Aryn, Ava, Delilah, Grayson, Howard, Jaylin, Jeriyah, Jezreel, Khamari, Mauri and Peyton; niece, Norkeysa; nephews, John IV, Maurice and Keyshawn.

Celebrating of His Spirit Harvey Lee Benford Sr., 74, of Cincinnati , Ohio, was born in Nashville, Tennessee on July 13, 1943. He passed away on March 24, 2018, after losing his battle with Leukemia. Harvey moved to Cincinnati with his family... View Obituary & Service Information

The family of Harvey Lee Benford created this Life Tributes page to make it easy to share your memories.

Celebrating of His Spirit
Harvey Lee Benford Sr., 74, of Cincinnati...

Send flowers to the Benford family.