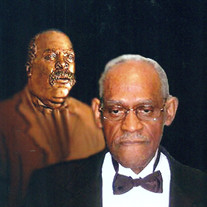 Celebrating His Spirit Ezekiel (Zeke) McNeil, affectionately known as Zeke by family and friends, was born on September 22, 1924 in Sedalia, Missouri to Elder James and St. Lucy McNeil. He departed this life on April 9, 2015. Zeke, the third of five children, moved to Cincinnati in 1926 with his mother and father, Elder James McNeil, who was assigned to pastor the Cincinnati Tabernacle of the Church of God and Saints of Christ . He grew up in the West End of Cincinnati in the 1920’s and ‘30’s tough economic times. However, his parents knew the power of God and God’s man. He is a graduate of the legendary Harriet Beecher Stowe School and “Old Woodward” High School. He was very active in athletics throughout school and excelled at boxing. Zeke’s talent in the ring landed him a sparring job with former Heavyweight Champion Ezzard Charles at the historic black-owned Sterling Hotel. In December of 1940, Zeke married Mary Catherine Shearer. Their union was blessed with two children, Phillip Eugene and Joyce Ann. He took great pride in witnessing Phillip and Joyce rise to the offices of Rabbi and Sister Elder in the church. Zeke was committed to the Church of God and Saints of Christ throughout his life. He served faithfully in various capacities in the local tabernacle, filling in when needed to keep the work of the church going. He was an ardent supporter of Rabbi H.Z. Plummer, G.F.A. and Rabbi Levi S. Plummer, G.F.A.. He was diligent in his service to Chief Rabbi Jehu A. Crowdy, Jr. , G.F.A., the current leader of the Church of God and Saints of Christ. As a young man, he served as a national officer of the YM&WDA. Elder James McNeil, Zeke’s father, eventually appointed him deacon of the Cincinnati Tabernacle. He served faithfully in that position until his passing. At one point, he pastored as a deacon in charge in the late eighties early nineties when the local tabernacle was without a pastor, Zeke held the Cincinnati Tabernacle together, serving as Deacon in Charge for a number of years. His love and loyalty to the work of the church, his humility and willingness to serve at any level will remain a hallmark of his life. As his health began to fail him in his later years, Zeke took up residence at the Meadowbrook Nursing Center, where he was known and loved by the staff and fellow residents. Their fondness for him was illustrated when he was crowned “King of Meadowbrook,” in 2013. He was preceded in death by his brother Samuel McNeil and his sisters, Mary Sutherlin and Janie Lumpkins. He leaves to cherish his memory a sister, Martha Gibson, his son Phillip (Charlene) McNeil; daughters, Joyce Madison, Angela Randolph, Phyllis Wright, Darlene Gates and Daphne (Freddie) Rhodes; Zeke will also be dearly missed by his numerous grandchildren, great-grandchildren; long-time, companions Lula Gates and Florence Miller; special friend and caregiver, Ozie Scruggs and a host of other loving relatives, friends and co-workers.

Celebrating His Spirit Ezekiel (Zeke) McNeil, affectionately known as Zeke by family and friends, was born on September 22, 1924 in Sedalia, Missouri to Elder James and St. Lucy McNeil. He departed this life on April 9, 2015. Zeke, the third... View Obituary & Service Information

The family of Ezekiel Zeke McNeil created this Life Tributes page to make it easy to share your memories.

Send flowers to the McNeil family.