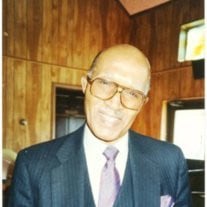 Celebrating His Spirit Eugene (“Gene”) H. Burton, the fourth of twelve children of the late Rev. Eugene B. Burton and Mrs. Sarah (Boozer) Burton, was born in Cincinnati, Ohio on December 12, 1910. He was called home on April 24, 2013 to be with The Lord. Gene finished his elementary schooling at Douglas Jr. High School and was a graduate of Woodward High School. He graduated from the University of Cincinnati with a Business Administration degree and later completed post-graduate work in Labor Relations at Ohio State University. He trained as a Hearing Officer-Investigator; a branch of Postal Inspections, the Training Division in Gaithersburg, Maryland. As a youth, Gene was a record- breaking performer in track, baseball, and basketball. He played several years in the old K.I.O Division of the semi-pro baseball league. In 1936, Gene began his Postal Service career in Cincinnati as a level 4 substitute clerk-carrier- and retired 38 years later as level 26 Director of Local Services. He was responsible for delivery and collections for Ohio, Indiana, and Kentucky with an annual budget of $55 million. Gene was a member of the NAACP, Urban League, IOTA Sigma Gamma Fraternity, True American Lodge #12 and Sinai Temple #59 (Shrine). He was also past chairman of transportation and a member of the Board of Directors of Rio Rancho Senior Citizen Center, and a member of the National Association of Retired Federal Employees. He was a founding sponsor for the Martin Luther King National Memorial. As the oldest living graduate from the class of 1927, he was very proud to be the “bell-ringer” at Woodward High School’s “Founders Day.” After retirement, Gene found time to write “Councilors Comments,” a weekly column that appeared in the Rio Rancho Observer. He served as councilman in Rio Ranch, New Mexico, Deacon of Mount Calvary Baptist Church, Albuquerque, New Mexico and was also designated Deacon Emeritus of First Baptist Church, Walnut Hills, Cincinnati, Ohio for his devotion of 68 years of membership. He was preceded in death by eleven siblings. In addition to his devoted wife, Zora, he is survived by his son Eugene H. Burton, Jr. (Wilma), four grandchildren: Joy M. Daniels, Curtis E. Burton, Jeffrey W. Burton, and Felicia D. Davis (Jackson) ; four great grandchildren, and three great-great grandchildren.

Celebrating His Spirit Eugene (“Gene”) H. Burton, the fourth of twelve children of the late Rev. Eugene B. Burton and Mrs. Sarah (Boozer) Burton, was born in Cincinnati, Ohio on December 12, 1910. He was called home on April 24, 2013 to be... View Obituary & Service Information

The family of Eugene H Burton Sr. created this Life Tributes page to make it easy to share your memories.

Send flowers to the Burton family.