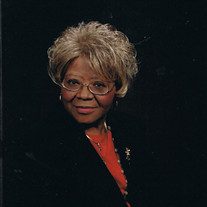 Celebrating Her Spirit . . . . . . Emma Lee Neal (nee Hayden) was born on March 19, 1935 in Stanford, Lincoln Co., Kentucky to the late Janie Hayden. Emma was the youngest of three siblings who preceded her in death, Harold Nelson and Dorris Jean Kelsor. Emma served in the United States Armed Forces. Emma became a Licensed Practical Nurse and served her community for 61 years—she retired from Christ Hospital after 33 years of service. Emma was a faithful member of Jerriel Baptist Church from 1957 until 2003 where she served on numerous ministries and was most proud of being the Chairperson for Founders Day. In 2004 she united with and became a faithful member of Corinthian Baptist Church, where she served with numerous church ministries. Emma was a long time member of the St. John Chapter 25 of the Order of Eastern Star. Emma was named as one of the Senior Citizen’s of the year for the City of Cincinnati. Emma was a beloved Aunt to many nieces, nephews, great nieces and nephews, as well as great-great nieces and nephews, cousins and a host of friends. She leaves to cherish her memory: Nieces Maxine Rittenburg, Jacqueline Parrish, and Yolonda L. Kelsor; Nephews Harold Nelson, Jr. and Earl W. Kelsor II. Her nephew Jerome Sanders preceded her in death October 2016. Many are the afflictions of the righteous, but the LORD delivers them from them all. ‘Auntie Em’ had a favorite scripture that she quoted many times when things were going on... ‘Eyes have not seen and ears have not heard and neither has it entered into the heart of man, all of the wonderful things that the LORD has in store for those who love Him.” Auntie was truly a woman of faith and chose to live out her last days in her home. She was surrounded by her loved ones when she departed this life on May 4, 2017 at University of Cincinnati Hospital.

Celebrating Her Spirit . . . . . . Emma Lee Neal (nee Hayden) was born on March 19, 1935 in Stanford, Lincoln Co., Kentucky to the late Janie Hayden. Emma was the youngest of three siblings who preceded her in death, Harold Nelson and Dorris... View Obituary & Service Information

The family of Emma Lee Neal created this Life Tributes page to make it easy to share your memories.

Send flowers to the Neal family.