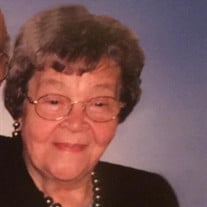 Celebrating Her Spirit. . . Dorothy Marie Thompson, 85, was born to the union of Charles and Jenny Cord on April 30, 1930 in Cincinnati, Ohio. The Lord called her home on Sunday, November 29, 2015. She grew up in College Hill with her four siblings and attended Cincinnati Public Schools, graduating from Hughes High School. Dorothy received Christ at an early age and was a life-long member of Second Baptist Church. Years later Dorothy enjoyed the distinction of being one of the oldest members of Second Baptist Church. She met her husband Andrew in 1953 at a Hamilton, Ohio roller skating rink, where Dorothy regularly skated. This meeting was the foundation of a 62-year love affair and friendship. The couple was blessed with three children, Michael C. and Andrew L. and Denis Thompson. Dorothy continued her education by enrolling in Chase Law School. She also attended McCall Trade School in Cincinnati’s West End, taking numerous secretarial courses. She enjoyed working for numerous prominent African- American physicians such as Dr. Breedlove, Dr. Paul Huff and many others. She raised her children and cared for the home for more than 10 years before going back into the work force. In 1968 she was hired by the Avon Corporation as an assembler, where she worked for 15 years. Dorothy was a loving wife, loving mother and a devoted grandmother. Although she enjoyed raising her sons, she doted on her friends’ daughters and her nieces. She was independent by nature and spoke her mind when needed. She loved to roller skate in her youth and skated until she was married. Dorothy also loved to shop!! She loved flowers and received bouquets from her husband nearly every week. In the kitchen, she earned a reputation for her signature macaroni & cheese and potato salad. She was preceded in death by her son, Michael in 1993; two sisters, Helen Thompson and Katherine Heard; two brothers, Charles (Sonny) Cord and Milton Thomas. Her loving spirit will forever be cherished by her husband Andrew; sons, Andrew L. Thompson of Trotwood, Ohio and Denis Thompson of Forest Park, OH; grandchildren, Michael L. Benson and Shane Mead; great-grandchildren, Adrian Benson, Michael L. Benson Jr. and Conner Mead. She will also be dearly missed by a host of other loving relatives, friends and her Second Baptist Church family.

Celebrating Her Spirit. . . Dorothy Marie Thompson, 85, was born to the union of Charles and Jenny Cord on April 30, 1930 in Cincinnati, Ohio. The Lord called her home on Sunday, November 29, 2015. She grew up in College Hill with her four... View Obituary & Service Information

The family of Dorothy M Thompson created this Life Tributes page to make it easy to share your memories.