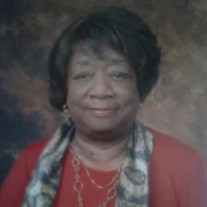 On September 29, 1935, Dorothy Mae Sawyer was born in rural Arlington, Tennessee to James Griffith Sawyer and Oswald Tucker Sawyer. She was the fourth of seven children born to this union. She accepted Jesus Christ as her Lord and Savior at... View Obituary & Service Information

The family of Dorothy Mae Sawyer-Moon created this Life Tributes page to make it easy to share your memories.

Send flowers to the Sawyer-Moon family.