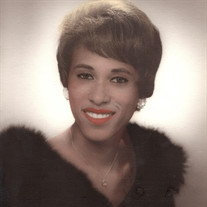 Celebrating Her Spirit Delories and her sister Gloria were was born August 6, 1936 in Cincinnati, Ohio, the first set of twins born to Elizabeth (Ware) and James G. Williams. On February 25, 2017 Delories Ates heard the flutter of angels’ wings and departed this life into the arms of The Lord. Delories, who was affectionately called “Lois,” and “Long Tall Sally,” accepted God as her savior early in life and was a proud, long-standing member of New Prospect Baptist Church. She attended Cincinnati Public Schools (CPS) and graduated from Woodward High School in 1954. She furthered her education at The University of Cincinnati, where she earned a Bachelor of Science in home economics in 1958 and a masters degree in Education in 1962. Lois was joined in marriage to the Edward Ates in 1966, to which their beautiful daughter, Mayla Ilse Ates, was born. She started her career with CPS as a teacher at Samuel Ach Elementary School. She also taught at Bloom and Sawyer Junior High Schools, before returning to Woodward High School. Lois, who touched many lives as a much-loved teacher and counselor, retired from Woodward in 1993. She was recognized by the Williams family as the “ official historian.” If there was any information needed about a family member.. young or old…Lois was the one everyone would go to. The Williams family reunion began as a result of Lois parents’ 50th wedding anniversary, which she was instrumental in initiating. Lois, an avid collector of flamingos, will be remembered for inspiring and helping many people. She was a good listener and was great at giving “life” advice. Her home economic talents were manifested through cooking, her ability to organize, make clothes, decorate her home and more. She also planted a home garden each spring and used its harvest of fresh vegetables to feed friends and family. Lois will sorely miss by all. She was preceded in death by her husband, William; her parents, Elizabeth and James G. Williams; three sisters, Norma E. Chaffin of Hartford, Connecticut, Dorothy Mae Lawson and her twin sister Gloria Davis of Cincinnati, Ohio; four brothers, John Edwards Williams, Carl Williams, Freddie D. Williams and James G. (Shirley) Williams, Jr. of Richmond Virginia. She leaves to cherish her memory her daughter, Mayla Ates; three sisters, Betty Jean (Earl) Mello of Baltimore, Maryland, Minister Carol Bates of Charlotte, North Carolina and Geraldine (Carl) Frazier. Her loving spirit will also be cherished by a host of nieces, nephews, great-nieces and great-nephews, cousins and many friends.

Celebrating Her Spirit Delories and her sister Gloria were was born August 6, 1936 in Cincinnati, Ohio, the first set of twins born to Elizabeth (Ware) and James G. Williams. On February 25, 2017 Delories Ates heard the flutter of angels&#8217;... View Obituary & Service Information

The family of Delories Ates created this Life Tributes page to make it easy to share your memories.

Celebrating Her Spirit
Delories and her sister Gloria were was...

Send flowers to the Ates family.