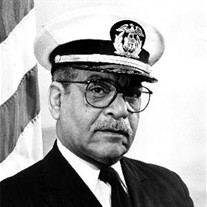 Yet another of the last few remaining Tuskegee Airmen passed away on Saturday, the 24th of October, 2015 in hospice care at Drake Hospital in Cincinnati, Ohio at age 93. Born to David and Marguerite McPheeters on January 7, 1922, Lt. Cdr. David. D. McPheeters Jr. attended Withrow High School and the University of Cincinnati before joining the Army in January 1942. He attended flight training at Tuskegee Army Air Field, and was later reassigned to the Field Artillery Unit at Fort Hood, Texas. He was chosen to attend Tank Destroyer Officer Candidate School (OCS) and graduated as a 2nd Lieutenant on February 11, 1943. He would later serve as a Materiel and Supply Officer in an Air Force Troop Carrier Wing at an airbase in Germany in the early 1950s. He had a long and distinguished career, retiring in 1989 as a Lieutenant Commander from the United States Maritime Service, the training arm of the United States Merchant Marines, serving as the Equal Opportunity Officer and the Student Financial Aid Officer. He had over 43 years of service in human resources, finance development, equal opportunity, community relations and public affairs. He has served as the Command Post Officer at Griffiss Air Force Base, Rome, NY, as a photographer at the Wright Patterson Air Force Base in Dayton and has held the position of Assistant Director of Public affairs in the Office of the Mayor, New York, NY. In his hometown of Cincinnati he has served as the Executive Director of the Cincinnati Human Relations Commission and various other city community service projects. He was very active in the Greater Cincinnati Chapter of the Tuskegee Airmen and also served as the chapter President for several years. He was also a member of Alpha Phi Alpha Fraternity. I remember him as an amazingly skilled woodworker & avid gardener with an incredible DIY (Do-It-Yourself) ethic who loved to build all projects to perfection. He was also an incredibly talented professional photographer who taught me nearly everything about the craft, including development/printing of images captured on self-rolled film in our own home darkrooms. I miss him so much already, and life will never be the same without him. Goodbye, Daddy. I wish you peace on your journey and will forever remember you with the deepest of love, respect, and admiration. Commander McPheeters is survived by his wife, Roberta, daughter Daviana Kathryn, stepdaughter Charlita Elise, sister Irma Tillery, in addition to many nieces, nephews, and cousins. A memorial service will be held at 2:00 pm on Sunday, 6th December in the Norman Chapel at Spring Grove Cemetery (Cincinnati, Ohio).

Yet another of the last few remaining Tuskegee Airmen passed away on Saturday, the 24th of October, 2015 in hospice care at Drake Hospital in Cincinnati, Ohio at age 93. Born to David and Marguerite McPheeters on January 7, 1922, Lt. Cdr.... View Obituary & Service Information

The family of David Dwight McPheeters created this Life Tributes page to make it easy to share your memories.

Yet another of the last few remaining Tuskegee Airmen passed...

Send flowers to the McPheeters family.