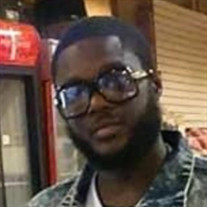 Celebrating His Spirit Darnell Salter Jr. was born on July 6, 1979 in Cincinnati, Ohio to the union of Ruth and Darnell L. Salter Sr. He departed this life on January 3, 2022 into the arms of The Lord. Darnell initially grew up in Mt. Auburn, where he lived with his parents and siblings. Upon the passing of his mother on January 6, 2004, he went to live with his Godmother, Nancy Fant, at the request of his mother, Ruth. He attended Cincinnati Public Schools and continued his education until he received his associates degree. He enjoyed collecting coins, rocks and crystals. He was outgoing, funny, charming, well spoken and sincere. Darnell was family oriented, fair, honest and a special son to Nancy Fant He was baptized at Pilgrim Missionary Baptist Church under leadership of Rev. Sherman Q. Ealy, He also enjoyed fellowshipping with Dr. Johnathan Brown at Pilgrim. He went to church with his mother Nancy and other family members on a regular basis. Darnell was the father of four children : Kevonna Mitchell, Deoveon and Davar Riggins and King Zya’re. He was the Grandfather of Leayah Mitchell and Keshawn Mitchell, Kyng Alexander and Lionel Braswell. He also was a “father figure” to many of his friends” children. He was preceded in death by his mother, Ruth Salter; his brothers, Michael Smith, Brandon Smith, Alvie L.”Zhock” Hudson ; his Grandmothers, Mary Dorn and Minnie Taylor; Grandfather, Grandison Embry; Uncle, Rev. John Crumbley ; nephew, Tre’pierre Hummons; close cousin, Ivan (Rizzy)Wright and God father Quincy Fant I. Chan Mekhael Wilson, Nora Fant never left my side one home with Hospice. Chan’tre Maston talked my ears off, daughter KeKe no words can explain; sister Tonya kept us laughing pow pow; brothers-in-law, Marcus, Dashawn and Devray were special; LaRoy kept the fashions going and Khanita Maston my big sister did her thang, Thank you all for having my back His wonderful spirit will forever be cherished by his father, Darnell Salter Sr. and Godmother, Nancy Fant; his siblings, Tonya (Devray) Dumas, Empress Nandi Nkosi, Khanita Maston, Quincy Fant II, Nora Fant, Tavaruis Lewis, Lakia Lewis, Tek,Tray Davis and Jasmine Davis; Uncles and Aunts, Mike (Deloris) Salter, Carolyn Salter Williams, Ethel Munlin, Christopher Dorn, Marilyn Salter, Darrell Salter, Dwight and Ronald Salter and Thomas Salter. Darnell will also be missed by a host of nieces, nephews, cousins and a community of friends.

Celebrating His Spirit Darnell Salter Jr. was born on July 6, 1979 in Cincinnati, Ohio to the union of Ruth and Darnell L. Salter Sr. He departed this life on January 3, 2022 into the arms of The Lord. Darnell initially grew up in Mt. Auburn,... View Obituary & Service Information

The family of Darnell L Salter Jr. created this Life Tributes page to make it easy to share your memories.

Celebrating His Spirit
Darnell Salter Jr. was born on July 6,...

Send flowers to the Salter family.