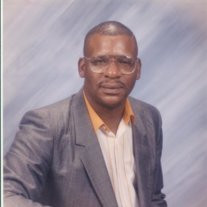 Colin Anthony Irving was born in Kingston, Jamaica on September 17, 1960 to George & Jemima Irving…the second child of their union. He departed this life on Aug. 31, 2013 to be with The Lord. At the age of 11, Colin migrated to the United States with his father and brother Norman to join his mother and sister Leonie in Cincinnati. He attended Cincinnati Public Schools, graduating from Withrow High School. After attending Cincinnati State, Colin went to work for the Kroger Company, where he worked for 15 years. Colin’s challenges in life connected him to others, especially those dealing with emotional issues. This inspired him to read everything he could and he even took several courses at the Recovery Center to enable him to become a better steward. Colin was always willing to assist others. If they didn’t have a place to live, he took them home until they could get on their feet, even if it posed a danger to him. He would say, “I am not afraid, God is watching over me.” Colin never thought of self, always of others. He was a gentle giant who loved his family. He shared his love of Taekwondo by volunteering to teach the sport at Recovery Centers and Bethel Baptist Church. He also enjoyed martial arts movies, gospel and reggae music, but most importantly he loved the Lord. He knew his Bible and always told us what God expected from us and how we should live. Even when he got the news of his terminal illness, he was confident in his relationship with God to know he was going to Heaven. Colin spent his final moments ministering to his loved ones to assure them that he would see everyone in Heaven as well. He was preceded in death by his father, George Irving, sisters, grandparents, aunt, uncles and many other relatives. His loving spirit will always be remembered by his mother, Jemima Irving; sister, Leonie A. Carter (Aldington); three brothers, Norman George Irving (Chrystal), George Bieh and Dalton (Sandra) Mosby; nieces, nephews and a host of loving family and friends.

Colin Anthony Irving was born in Kingston, Jamaica on September 17, 1960 to George & Jemima Irving&#8230;the second child of their union. He departed this life on Aug. 31, 2013 to be with The Lord. At the age of 11, Colin migrated to the United... View Obituary & Service Information

The family of Colin Anthony Irving created this Life Tributes page to make it easy to share your memories.

Colin Anthony Irving was born in Kingston, Jamaica on September...

Send flowers to the Irving family.