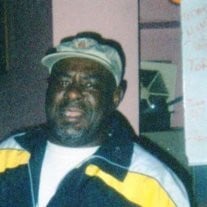 Celebrating His Spirit Coleman Brown III, son of Dorothy Brown and Coleman Brown Jr, was born on April 22, 1949. He was called home to be with The Lord on April 17, 2013. Coleman, affectionately called “CB,” “Ikin” and “June,” by family and friends, was the third of the oldest Brown siblings. He attended Cincinnati Public Schools and graduated from Hughes High School. While attending Hughes, Coleman met Doretha Brown, his future wife and mother of his two children. Brown worked as a carpenter for numerous years and as a contractor with his father. However his passion was football... which he played and coached. Brown played semi-pro football for the Cincinnati Black Panthers and coached little league football for the Olympic Colts, Avondale Warriors and Findlay Street Wildcats. He felt his life calling was to work and mentor young men through football. He used the sport to teach and discipline his grandchildren and any other young men he came in contact with. His infamous “loud “ voice made his presence known , whether he was inside or outside on the football field. He was preceded in death by his mother, Dorothy Brown and son, Garrett Brown. Coleman leaves to cherish his memory his father, Coleman Brown Jr.; his three children, Alisha, Donald and stepdaughter, Shayla; nine siblings, Helena (Ernest) Goines of Mississippi, Dorothy Ferrell, Glenda Jones of Mississippi, Vera (Vermiah) Pass, Clara Brown; brothers, Charles Brown of Mississippi, Rev. Cornelius (Terri) Brown of Brooklyn, NY, Benjamin Brown and Daryl Brown; his aunt, Mary Kopenhaven and uncle, Samuel Brown; six grandchildren, Tiesha, Myesha, Shaquala, Ricardo, Devan and Clarence; six great-grandchildren, Miracle, Kah’niyah, Ge’onnah, Ga’mylah, Adrion, Ge’ontae. He will also be dearly missed by a host of nieces, nephews, special friend, Cynthia Riley, niece, Ruth Ferrell and by the many, many young boys he coached and helped to shape into productive young men.

Celebrating His Spirit Coleman Brown III, son of Dorothy Brown and Coleman Brown Jr, was born on April 22, 1949. He was called home to be with The Lord on April 17, 2013. Coleman, affectionately called “CB,” “Ikin” and “June,” by family... View Obituary & Service Information

The family of Mr. Coleman Brown III created this Life Tributes page to make it easy to share your memories.

Send flowers to the Brown family.