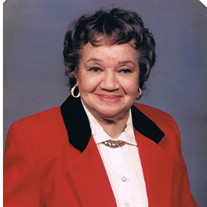 Claire Louise Tompkins Robinson was born on February 21, 1916 on Paxton Road, Hyde Park, Cincinnati, Ohio, to Thomas L. Tompkins and Edna Lewis Tompkins. She was the youngest of three children. Her sister Lauradean Tompkins Ball and her brother Thomas L. Tompkins, Jr., preceded her in death, at an early age in their lives. Claire was educated in the Cincinnati Public Schools and at Salmon P. Chase Business College. She was formerly married to Lacurtis L. Burton. To this union four children were born; Warren Ronald Burton, Sr., Gary Layne Burton, Sr., Kenneth Rachon Burton, Sr., and Carole Charlene Burton-Ecton. Claire was confirmed, along with her children, at St. Andrew’s Episcopal Church in the early 1950’s. She was an active Team Leader of the Altar Guild, a former Co-Chairman of the Pastoral Concerns Committee, a former member of St. Anne’s Guild and a former volunteer worker in the Church Pantry. She was also an active member of the Wednesday Bible Study Class. She worked at the Walnut Hills YMCA for several years. She also worked for the Ohio State Department of Radiology at the Cincinnati General Hospital. She was employed by the Federal Government, Dept. of Agriculture for 10 years, until the office was moved to Minneapolis, Minnesota. She then started working with the Dept. of Defense, U.S. Army Corps of Engineers, where she retired after 25 years with the Agency. While working with each agency she received several awards for outstanding performance. In 1972, she was united in marriage to Dr. Leo G. Robinson of Springfield, Ohio. They moved to Cuernavaca, Morelos, Mexico where they resided for 8 years. During these years they attended St. Michael’s and All Angels Episcopal Church in Cuernavaca, Morelos, Mexico, where she served as Secretary of the Women’s Alliance of the Parish. She was also an active member and Treasurer of the National Pan-American Round Table Organization in Cuernavaca, Morelos, Mexico. Members of this organization were of all nationalities. Leo, “Doc”, preceded her in death in 1992. She was a member of the Federated Optimist Club, serving as Treasurer for several years. She was also a member of the Heebie-Jeebies Social Club. She was preceded in death by sons Warren Ronald Burton, Sr. (Dorothea) of Piqua, Ohio and Gary Layne Burton, Sr. (Dorothy) of Woodbridge, Virginia and her stepdaughter Elaine Robinson Butterfield of New York City. She leaves to cherish her memory her son Kenneth Rachon Burton, Sr. (Tomeka) of Cincinnati, Ohio and daughter Carole Charlene Burton-Ecton of Mitchellville, Maryland. As well as her nephew Clarence S. Ball (Ruth) of Columbus, Ohio, cousin and close friend Dr. Charles O. Dillard (Jeanette) of Milford, Ohio and many grandchildren, great grandchildren, great-great grandchildren, nieces, nephews, great nieces and nephews, great-great nieces and nephews, cousins, and a host of other relatives and friends. In lieu of flowers, contributions may be made to St. Andrew’s Episcopal Church Memorial Fund in Memory of Claire Robinson.

The family of Claire T Robinson created this Life Tributes page to make it easy to share your memories.

Send flowers to the Robinson family.