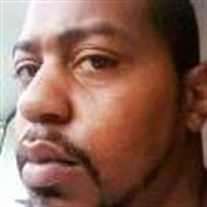 Christopher Lee Allen, 32, was born to the union of Karen Allen and Willie Eastman on March 5, 1982. He departed this life, into the arms of the Lord, on Oct. 13, 2014. Christopher, affectionately known as “Chris,” grew in Cincinnati and attended Cincinnati Public Schools. He attended Colerain High School and obtained his GED from Job Core, obtaining one of the highest GED scores in the school’s history. He remained in the Cincinnati area following his graduation. Chris and Nadine Branch became the proud parents of Promise Allen on July 19, 2011. Chris was the most outgoing, fun “the jokester,” of the party. He was blessed with infectious laughter, which became his trademark throughout his life. He loved to play corn hole, video games, cards and dominos. He was the second of four children in the Allen household. Chris was a sports buff and had an extensive knowledge of sports trivia. Although he was not a chef, he enjoyed watching food shows with his mother. His fun-loving personality attracted numerous friends into his inner circle for most of life. He was preceded in life by grandparents, Bessie Eastman, great-grandmother, Octavia Cornist and great-grandfather, Albert Cornist Sr; aunt, Louella Eastman. His memory will forever be cherished by his parents, Karen and Willie Allen; daughter, Promise Allen; his brother, Marcus Allen; sisters, Tiffany Cunningham and LaTasha Allen; grandparents, Ada and Allen and Willie Eastman Sr. His fun, loving spirit will also be missed by a host nieces, nephews, friends and other family.

The family of Christopher L Allen created this Life Tributes page to make it easy to share your memories.

Christopher Lee Allen, 32, was born to the union of Karen Allen...

Send flowers to the Allen family.