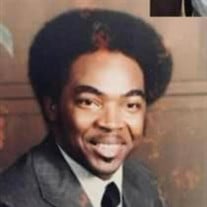 Celebrating the life of Charles Neal 12-3-1941-May 1, 2022 On Wednesday, December 3, 1941, four days before the Japanese attack on Pearl Harbor, Charles Neal entered into this life… destined to have a huge impact on the world. He was number seven of 15 Neal children (Betty, Robert, William, Mattie, Virginia, Sylvia, Charles, Marietta, Rose, James, Esther, Janet, Phebe, Christine and Sarah). As the third son, Charles grew to be the patriarch of the Neal family and like his father, Robert Lee Neal, a pillar of the Cincinnati community and beyond. Charles, a football and track star, graduated from Hughes High School in 1960 and received a football scholarship to Knoxville College. In 1967 he earned his BA degree in Education from Knoxville College, Knoxville Tennessee. During his college years, he supervised gym programs for boys ages 14- 19 at the Wesley Settlement House in Knoxville. He also pledged Alpha Phi Alpha Fraternity, Incorporated and crossed September 29, 1973. He later joined the Delta Gamma Lambda Chapter Cincinnati. A true servant leader, Charles served as the executive director Walnut Hills YMCA Melrose Branch, where he developed a plethora of programs for Black youth of all ages, as well as programs for career professionals and senior citizens. From his outstanding work there, he went on to work with many other YMCA branches throughout the Midwest and the world. Those branches included Cincinnati’s West End, Lincoln Heights, Madisonville, Dayton, OH, and Louisville, KY, where he served as a board member even through retirement. He also made a special trip to Johannesburg, South Africa on a YMCA mission which he often spoke about. He led and perfected the. The Young Black Achievers program, which he was passionate about. The program’s many banquets once hosted Corretta Scott King and Danny Glover. Charles held great influence on the lives of a multitude and he later became District leader over the Greater Cincinnati and Northern Kentucky area. However, he never lost his love for the inner city branches, even at the executive level, and continued to work very closely with them. Charles’ passion for football and uplifting children led him to coaching at the semi=pro level for The Cincinnati Panthers for several years, for which he won several state championships. He also couched peewee neighborhood teams,ages four through 12, along side his brother-in law Leonardo Reid. Together, they coached for the Little Red Machines of Bond Hill and led their teams to many championships throughout the years. He was destined to marry his childhood sweetheart, Lucrecia D. Neal from the start. Charles and Lucrecia journeyed through life together, first as friends at Samuel Ach, then as high school sweethearts at Hughes and through college. Lucecia later assisted him in his work at the many branches of the YMCA. Married for 56 years and together for many more, the Neals traveled the globe from cruises, to flying internationally. They joined Carmel Presbyterian Church at a young age and were faithful members for more than 40 years before relocating to Texas later in life. While an active member of Carmel, he served on the Mens Brotherhood Committee, President of the Usher Board, and was also an Elder. Passionate about the Lord, he loved gospel music and even though he was not the best singer, he loved to hear Lu sing and practice for church choir concerts. The Neals participated in “Carmel on Wheels,” with their close friends from Carmel’s church choir. They traveled to Gatlinburg, TN yearly with the group for a retreat that was filled with fellowship, praise and relaxation in the Smoky Mountains. Charles was a brother, uncle, mentor and friend. He and his loving wife were most proud to parent Jordan L. Hill, their nephew and special son. Charles was proceeded in death by his father and mother, Robert L. and Willa Mae Neal; father in-law and mother in-law, Leonard G. Reid and Beryl Reid; siblings, Betty, Robert, William, Mattie, Sylvia, James, Esther, Janet, and Phebe; brother in-law, Leonardo Reid; nieces Gloria “Red” Smith and Gigi Reid He leaves to cherish his memory his loving wife of 56 years, Lucrecia D Neal; his special son/ nephew, Jordan L. Hill; five sisters, Marietta Williams, Sarah (Thomas) Doggett, Virginia (Marshall) McMillan, Christine Neal, Rose Williams. He will also be dearly missed by a host of nieces, nephews and countless family and friends..

Celebrating the life of Charles Neal 12-3-1941-May 1, 2022 On Wednesday, December 3, 1941, four days before the Japanese attack on Pearl Harbor, Charles Neal entered into this life&#8230; destined to have a huge impact on the world. He was... View Obituary & Service Information

The family of Charles Neal created this Life Tributes page to make it easy to share your memories.

Send flowers to the Neal family.