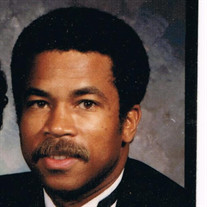 Celebrating His Spirit Charles Almon McDougald, Jr., affectionately called “Chuck” by family and friends, was born on September 16, 1955 in Laurinburg, North Carolina to the late Pauline (Postell) and Charles Almon McDougald, Sr. He departed this life on February 10, 2022, surrounded by the love of his wife, into the arms of The Lord. He was preceded in death by his sister, Camilla M. Knapp. Chuck spent some of his early years living in Laurinburg, N.C. with his paternal grandparents, Wallace and Ruth McDougald. He attended public school in both Laurinburg and Cincinnati. He graduated from Withrow High School in 1973 and enrolled in Case Western Reserve University. He later enrolled in The University of Cincinnati, where graduated with a Bachelor of Arts in History. In November of 2004, Chuck married Yvonne Jones at his grandmother’s church in Laurinburg, North Carolina. He chose to marry in Laurinburg as a tribute of honor and appreciation to his grandmother for the contribution she made to his life. He spent several years as a driver for DHL. In addition to his DHL position, he expertly indulged in computer technology services as a special interest project. His expertise and passion for computers paved the way for employment with Micro Center in Cincinnati, where he worked until he retired. He enjoyed building computers as well as servicing them and helping others wherever problems arose. Chuck was the kind of guy who would give you the shirt off his back. A few days before he passed, he said he knew since he was 5 years old that he was supposed to help people. If you needed his advice, he would give it to you. If you needed something and he had it to give, he would give it to you. He enjoyed movies, cooking, music, history, playing spades and bargain hunting. He also loved football and was an avid Bengals fan. To cherish his memory are his wife, Yvonne; his step son, Aaron Howard; grandchildren, Aaron, Jr., and Morgan along with their mother, Marsha Lane; a brother, Wallace Mark McDougald (Pamela) ; a sister, Autumn M. Smith; three nephews whom he nurtured, Charles B. McDougald; Otis Smith, Jr. and Wilbur Griffin, III; sister-in-law, Sandra Roberts; brother-in-law, Lesley Jones, Jr.; two aunts, Katherine P. Jones and LaVerne McDougald; devoted nieces, nephews, cousins and a community of friends. They each will forever cherish their individual precious memories of “Chuck.”

The family of Charles A McDougald Jr. created this Life Tributes page to make it easy to share your memories.

Send flowers to the McDougald family.