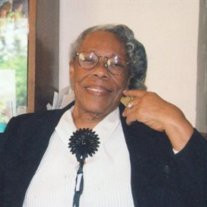 Celebrating Her Spirit Catherine Brown Fails was born to Willie Edwards, her mother, and Willie Ben Edwards, her father, on July 29, 1923 in Ty Ty, Georgia. The Lord called her home on July 18th, 2013. Catherine, one of 13 children, grew up on her family farm in Ty Ty. She was full of stories, and her former country life provided volumes of material. Country life carried its share of tragedy as well. She experienced a brother being murdered; one mysteriously drowning in a boating accident, and yet another being killed by a train. Amidst the backdrop of this turmoil, Catherine left TY TY at the young age of 13 and headed for Albany, Georgia. Her tenacious spirit pushed her on until she arrived in Cincinnati in the early 1940s. Once up north, Catherine sent money home on a regular basis to help her family. She also joined thousands of civilian laborers who volunteered their services at Wright Patterson Air Force Base in Dayton, Ohio. When she arrived in Cincinnati, she joined St. Marks Catholic Church in Evanston, where she was a long-standing member. She entered holy matrimony…and business… with Willie Frank Fails. The Fails started their “Man and Wife” construction company, which they successfully ran for over 20 years. The couple was blessed with one daughter, Marylin Brown Atkins, who passed at the age of 32. Catherine led her life as a Christian on a day-to-day basis. She treated others the way that she wanted to be treated. She gave money, advice, knowledge, food, clothing, time, rides, tears, spankings, hugs, smiles, laughs, love, bible scriptures and prayers to many. She was given many names such as “Momma, Babe, Mrs. Brown, Big Mama, Cat, Downtown Catherine Brown, Mama Cat, Grandma Brown, Grandma and GG. At one time or another she was all of these and so much more. She was our shining star and our friend. She also worked in nursing at various nursing homes and hospitals. She opened her own group home in the 1990s. Upon the passing of her daughter, Catherine and Willie started raising their four-year-old and 11-year-old grandsons. Catherine nourished her grandchildren with love, no-nonsense discipline and humor, a gift she also extended to family and friends alike. It was faith and God that guided Catherine to Cincinnati. It was also faith and love that continued to help her grow and to bless the many lives that she touched and nourished throughout her journey.

Celebrating Her Spirit Catherine Brown Fails was born to Willie Edwards, her mother, and Willie Ben Edwards, her father, on July 29, 1923 in Ty Ty, Georgia. The Lord called her home on July 18th, 2013. Catherine, one of 13 children, grew... View Obituary & Service Information

The family of Catherine Brown Fails created this Life Tributes page to make it easy to share your memories.

Celebrating Her Spirit
Catherine Brown Fails was born to Willie...

Send flowers to the Fails family.