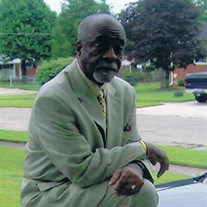 Carl Clifton Frazier was blessed with 82 years of life... a gift he passionately embraced as a man of God, a devoted husband, a loving father and trustworthy friend. On April 16, 2017, during the serenity of Easter Sunday morning, God called him home into His care. He was born on May 1, 1934 in Cincinnati, Ohio to the union of George and Nettie Frazier. Carl was baptized in the Catholic Church at an early age and attended Catholic school , graduating from DePorres High School. After graduation, he served the United States Navy for four years, receiving an honorable discharge in 1958. Upon his return to Cincinnati, he earned an associate degree in Electrical Engineering from the University of Cincinnati. Carl married Geraldine in 1970. Their union begot one cherished daughter, Carmen Frazier. And Carl embraced Geraldine’s three sons, Robert II, Michael and Kenneth L. Berry as his very own. He embraced fatherhood full force and managed his four children's health, education and personal comforts with loving care. He always put his family first--a quality that laid a foundation for his children to follow. His sons introduced him to chess, initially beating him time after time. Carl, who played various sports in his youth, was highly competitive. After studying the game and practicing, Carl became an avid, passionate chess player. He taught chess to others and would challenge anyone, anywhere, at any time, to a game. He also took the time to teach children chess after school. Carl was also a jazz enthusiast and fueled his interest through research and collecting an extensive music collection. As a history buff, he cherished black history, his family history and Cincinnati’s history. Carl’s caring for people afforded him the ability to meet no strangers. And he was just as passionate about grilling out! He loved grilling barbeque turkey and was constantly on the lookout for new grills to buy, even at the expense of getting in trouble with his wife. He was preceded in death by his parents, Mr. and Mrs. George and Nettie Frazier and his brother, Leon Frazier . Carl ‘s memory will forever be cherished by his wife of 45 years, Geraldine; his daughter, Carmen C. Frazier; three sons, Robert Berry II, Michael Berry, and Kenneth L. Berry; his brother, George R. (Arlene) Frazier and his sister, Gloria Walker; six grandchildren, Shaunta, Tia, Brandon, Michael, Lauren, and Cannon; one great -grandchild, Avery. His loving, out-going spirit will also be dearly missed by a host of other family and friends he touched throughout his journey.

Carl Clifton Frazier was blessed with 82 years of life... a gift he passionately embraced as a man of God, a devoted husband, a loving father and trustworthy friend. On April 16, 2017, during the serenity of Easter Sunday morning, God called... View Obituary & Service Information

The family of Carl Clifton Frazier created this Life Tributes page to make it easy to share your memories.

Carl Clifton Frazier was blessed with 82 years of life... a gift...

Send flowers to the Frazier family.