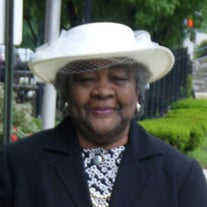 Celebrating Her Spirit. . . . Linda Brunell Hillman was born on June 13, 1931, to the union of Richard and Gladys Lively. Brunell, who preferred to use her middle name throughout her life, went home to be with The Lord on Dec. 26, 2015. It was a journey she prepared for all of her life. Brunell was born in Savannah, Georgia, where she grew up in a loving family. She graduated with high honors from Chatham County High School, in Savannah, GA and continued her education by taking college classes. She moved to Cincinnati as a young woman, where she met James B. Hillman. God blessed their union with seven children. Mr. Hillman preceded her in death in 1989 after more than 20 years of marriage. She was also preceded in death by her children, Curtis A. Hillman, Gladys Victoria Bell-Jones, Jennifer Hillman and her sister, Rita Mae Harris. She was a dedicated wife...and an awesome mother to her 10 children and every child in the neighborhood! Known to countless neighborhood children as “Momma Hillman,” there was not a soul she would not feed. Her children never went homeless, without clothes or hungry. Brunell’s “Hamburger and French- Fry Fridays” are fondly remembered by her children today. And the sound of her voice as she called each of her 10 children’s’ names from her porch at the end of the day is now legendary. Her rule was stated once and it was clear to all her children that it should be followed. No matter what they we were doing or where they were playing when they heard her call, they should stop and head home for dinner. The joy of cooking wonderful meals for her children, extended family members and friends was one of her many passions. However, Momma Hillman’s true life-long passion was The Lord Jesus Christ, which she never shielded away from talking about.Brunell was a long- standing member of Rose Chapel Missionary Baptist Church. She received a special dedication as a mother of the church in the spring of 2014. She served well with her church family and she loved Pastor Mark and Lady Flag, like they were her own children. (“Thank you Mom for never limiting your love”). She was once employed by an Ohio Senator who loved her dearly. The love Brunell showed them was so overwhelming that they trusted her with their best. And they considered her entire family as family. Brunell spent much time with the lord with every moment she had. During one of those moments, she heard the voice of the lord instructing her to move to Columbus, Ohio to be closer to one of her son’s. She left Cincinnati and moved to Columbus in July, 2014. She was not only close to her son, but she was blessed to live in a beautiful facility where she made many new friends and shared that extended love of family and Jesus Christ. And she continued to look after her grandson Brandon. It was in Columbus, Ohio at Grant Medical Hospital where the lord called Brunell “Momma Hillman” home. Her purpose driven life will be cherished by her surviving children; Charles (Carolyn Lively), Lewis Bell, Vanessa, Arthur, Benjamin, and Audra Hillman, and Sandra Lynn (Raul) Bombela; 19 grandchildren, 10 great- grandchildren; two step-sisters, Darlene Cowins and Pamela Rogers; one step-brother, Ricky Lively, and a host of other loving relatives, friends. Her loving, kind spirit will also be cherished by the former Avondale neighborhood she helped to nourish, feed and love!!

Celebrating Her Spirit. . . . Linda Brunell Hillman was born on June 13, 1931, to the union of Richard and Gladys Lively. Brunell, who preferred to use her middle name throughout her life, went home to be with The Lord on Dec. 26, 2015. It... View Obituary & Service Information

The family of Brunell Hillman created this Life Tributes page to make it easy to share your memories.

Send flowers to the Hillman family.