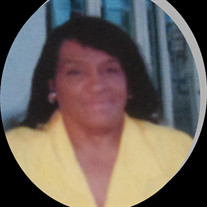 Celebrating Her Spirit Brenda Joyce Jackson, 65, was born in Hazard, Kentucky on April 15, 1950 to the union of Stanley and Josephine Cochran. On April 20, 2015 Brenda heard the flutter of Angel’s wings and departed this life to be with The Lord. Brenda grew in Hazard, Kentucky, where she attended elementary and high school. After high school, she met her future husband, William Jackson. The couple were married on November 6, 1971 and shortly moved from Hazard to Cincinnati. Their union was blessed with five children, William Jackson Jr., Latoya Jennette Jackson, Latrica Denise Jackson, Curtis Andre Jackson and Marcus Dupre’ Jackson. Brenda dedicated her life to training and guiding her children in the way they should go. Her children remember her as a kind, gentle, patient, sweet, loving Godly mother who encouraged them to continue to keep God first in all that they do. Brenda, who was soft spoken by nature, loved God and was passionate about sharing God’s word with everyone she came in contact with. She was an active and dedicated 20-year member of Great Amazement International Ministry (formerly known as God’s Church of Miracles. She never missed a church service…or church function if she could help it. Brenda also dedicated her children to God and encouraged them to explore the beauty of the Gospels. Her life was God and God was her life. Brenda always had words of encouragement for anyone who needed it. She kept all of her family and friends lifted up in prayer. Her loving, kind spirit will be dearly missed by her husband, her children, grandchildren and friends. However, everyone who loved her will celebrate the fact that she is at peace and with her Creator. She was preceded in death by her brothers, Stanley Cochran Jr. and William Cochran; sisters, Sonia Dean Finley and Mary Pittard. Brenda leaves to celebrate her memory her husband, William Earl Jackson Sr; two daughters, Latoya Jackson and Latrica Jackson; three sons, William (Constance) Jackson Jr., Curtis and Marcus Jackson; sisters, Shirley Vick, Deborah Huffaker and Stephena Pope; seven grandchildren, Kierra Jackson, Taijah Calloway, Aysha Williams, Essence Jackson, Jayla Jackson and Sianni Jackson and grandson, William Tavari Jackson. She will also be dearly missed by a host of other family, friends and her God’s Church of Miracles church family.

Celebrating Her Spirit Brenda Joyce Jackson, 65, was born in Hazard, Kentucky on April 15, 1950 to the union of Stanley and Josephine Cochran. On April 20, 2015 Brenda heard the flutter of Angel&#8217;s wings and departed this life to be with... View Obituary & Service Information

The family of Brenda Joyce Jackson created this Life Tributes page to make it easy to share your memories.

Celebrating Her Spirit
Brenda Joyce Jackson, 65, was born in...

Send flowers to the Jackson family.