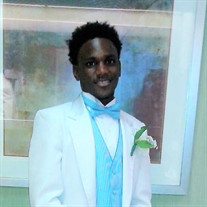 Celebrating His Spirit . . . . Brandon Martez Horton, was born in Cincinnati, Ohio on February 19, 1996 to the union of Donna and Ronmeco Horton. He departed this life on August 4, 2017 into the arms of The Lord. Brandon, 21, was the fourth of six children. He grew up in a happy, boisterous Horton household, answering to the nickname of “Big Mac” from his family and “B” from his peers. As a youngster, Brandon attended Burton and South Avondale Elementary Schools, where he was introduced to football and his childhood sweetheart, Sharnee Johnson. As a child, Brandon was quiet, energetic and a loving spirit who got along well with his siblings and friends. Although he was a homebody, Brandon loved to go out and play basketball and football with friends. As he grew older, Brandon developed a strong work ethic. He started working as a golf caddy when he was a teen at The Hyde Park golf course. He continued working various jobs, including Wendy’s, The Millennium Hotel, The U.S. Post Office and Grasscor. Brandon seldom complained about anything and faced life with a positive, smiling spirit. He met Sharnee when she was a student at South Avondale. Although they went to separate schools, they maintained a friendship that evolved into a loving relationship. Brandon was a proud and devoted father of his son, Brandon Jr. and daughter, Aria. He wanted the very best for his children and enjoyed spending quality time with them. He was also passionate about his music. Brandon was an aspiring rapper and was working on a recording. He loved football throughout his life and was a dedicated fan of The New England Patriots. His loving spirit will forever be cherished by his children Brandon Jr. and Aria; his parents, Donna and Ronmeco Horton; siblings, Christopher, Tameko, Ronmeco , Aubrey and his “Twin,” Ayannah; sweetheart, Sharnee Johnson; maternal grandparents, Brenda Deering and Samuel Madden; paternal grandparents, Linda and Ronald Horton; great-grandparents, Helen Deering and Hazel Bobbitt; uncles, Shawn (Latasha), Dontae (Tina), Ronald (Summer) , Lemond (Jessica), O’ndrae Horton, Gabriel, Emanuel and Samuel Madden ; aunts, Renee Deering, Dorothea Jones, Eltameace Sims, Shinay Ward and Yolanda Madden. He will also be dearly missed by a large and loving extended family of additional great aunts, uncles, cousins and friends.

Celebrating His Spirit . . . . Brandon Martez Horton, was born in Cincinnati, Ohio on February 19, 1996 to the union of Donna and Ronmeco Horton. He departed this life on August 4, 2017 into the arms of The Lord. Brandon, 21, was the... View Obituary & Service Information

The family of Brandon Martez Horton created this Life Tributes page to make it easy to share your memories.

Send flowers to the Horton family.