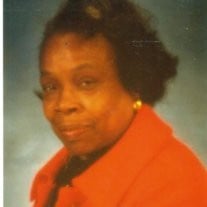 Betty L. Headen was born on September 17, 1917 to the union of Susan (Rodgers) and James in Montgomery, Alabama. She departed this life to be with The Lord on September 26, 2013. Betty grew up in Montgomery, where she attended school. She moved to Cincinnati as a young adult and began working as a domestic. Betty worked for most of her life as a housekeeper and foster mother. She was the mother of one daughter, Geraldine and nearly 60 foster children. Betty, who dearly loved and nurtured children, was a foster parent for more than 40 years. She opened the doors of her five-bedroom house and her heart to five and six year-olds, who were traditionally hard to adopt. Most of them found love and a life with Betty until they were teens. She found The Lord at an early age. She was a long-standing member of New Friendship Baptist Church. She participated in the church’s Willing Workers and the Good Samaritan Clubs, both of which served the needs of the church and community for many, many years. Betty was a kind, peaceful spirit who gave unconditional love. She was active in her church, loved to cook and to collect dishes and dolls. Her clients also gave her many gifts for her services, which she never turned down. Her husband, Booker Headen, preceded her in death years ago. She found and companionship with Gene Toran for nearly 50 years, who also preceded her in death along with her great-grandson, Gerald Womble; two brothers, James Parks, James Edwards Webster Jr. . She lived by the motto of “always do your best…and God will do the rest.” She leaves to celebrate her life one daughter, Geraldine Fannon; one granddaughter, Rachelle D. Womble-Ward (Tiney); great-granddaughter, Jasmine Womble, Britteny Ward and Tyra Ward; one sister, Verdie (Percey) Williams of Washington; two brothers, Melvin (Claudia) Webster and Arthur (Annie) Webster, both of Detroit, Michigan.

Betty L. Headen was born on September 17, 1917 to the union of Susan (Rodgers) and James in Montgomery, Alabama. She departed this life to be with The Lord on September 26, 2013. Betty grew up in Montgomery, where she attended school. She... View Obituary & Service Information

The family of Betty L Headen created this Life Tributes page to make it easy to share your memories.

Send flowers to the Headen family.